The BBC’s Magazine section has a story on a 13-year-old kid’s experience over the course of a week using one of the original Walkman tape players, which came out 30 years ago this week. As you might expect, it’s replete with “How does this work? This looks funny. I can’t believe people actually used to think this thing was awesome!” from the younger generation. (It’s easy to wonder how he couldn’t understand a Walkman, but you have to remember he’s just 13. It would be like asking someone from my generation to figure out a reel-to-reel player in 1986.)

It took me three days to figure out that there was another side to the tape. That was not the only naive mistake that I made; I mistook the metal/normal switch on the Walkman for a genre-specific equaliser, but later I discovered that it was in fact used to switch between two different types of cassette.

He dinged the Walkman for its bulk, weight, battery life, and capacity, but enjoyed the way it had two earphone jacks instead of one (only the first Walkmans did) and the socket for plugging directly into AC power.

Did my dad, Alan, really ever think this was a credible piece of technology?

"I remembered it fondly as a way to enjoy what music I liked, where I liked," he said. "But when I see it now, I wonder how I carried it!"

The Walkman really was the iPod of its day, in more ways than one. Not only was it the way people listened to music portably back then, but it was the huge gotta-have-it device. Expensive, too—at over $200 in 1983 ($470 in 2013 dollars), it was tantamount to the iPod in price as well. I didn’t get mine until a few years later when they were running at $50 to $60 thanks to competition from other, cheaper brands. (In fact, my first one was a General Electric.)

Funny thing, though: you haven’t seen competition bring prices down as much for iPods as you did Walkmans back in the day. Probably that’s because they’re not as substitutable as Walkmans. Any player could play any cassette, but now you’ve got vendor lock-in with iTunes and other music apps. A switch from one device to another could mean going through a lot of rigamarole.

Anyway, Sony has never managed to recapture its glory days in the portable-audio arena. It’s had some portable device hits, such as the Clié PDAs and the PlayStation Portable, but in terms of audio players it’s by and large the also-ran. Really, it’s hard to find anything that can compete with an iPod these days. 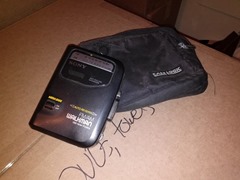 Over the course of packing for my move to Greenwood, IN, I rediscovered my own Sony Walkman, one of the generation a few years later that was smaller and lighter with more features, as well as the Case Logic case I used to cart it and four tapes of my choice around in. I remember way back when, I was so into having my tunes available that I would take not only that case, but two 30-tape portable cassette cases with me everywhere I went. As nostalgic as I am for the bad old days, I still don’t feel any urge to ditch my 32 GB Android smartphone for it. Mobile technology marches on.