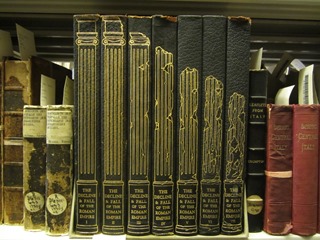 Apropos of the discussion about e-books and spines a few days ago, this post on imgur.com displays a hardcover book spine design that’s nothing short of brilliant.

The book is, of course, Gibbon’s The History of the Decline and Fall of the Roman Empire, a controversial treatise in its day and of course now in the public domain everywhere (and hence available as e-books). It’s doubtful that any possible cover design for the e-books could beat this spine design, however.

It also engendered an amusing anecdote that I often like to reflect upon in today’s world of rapid writing and publishing:

Tim Duke of Gloucester, brother of King George III, permitted Mr. Gibbon to present to him the first volume of The History of the Decline and Fall of the Roman Empire. When the second volume of that work appeared, it was quite in order that it should be presented to His Royal Highness in like manner. The prince received the author with much good nature and affability, saying to him, as he laid the quarto on the table,