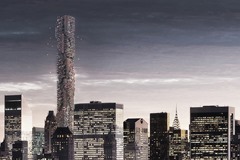 If Amazon does start using delivery drones, how is the infrastructure to support them going to work? FastCoDesign looks at a design concept for a skyscraper to support an immense drone delivery network.

Called “The Hive,” it’s effectively a huge structure lined with thousands of docking stations for drones to land and take off. While the article refers to it as “a big, tall pile of sci-fi,” it does note that the design would make sense if drone delivery was to become that ubiquitous—perhaps not all devoted to one provider, like Amazon, but a single skyscraper could play host to dozens of drone-using businesses that provided a range of products and services.

It puts me in mind of Vernor Vinge’s novel Rainbows End, in which FedEx delivery drones played a major part. That novel had them fired railgun-style out of a launch cannon at a shipping facility, but perhaps something like this would make more sense. In any event, we’re probably still years away from any actual implementation of Amazon delivery drones, no matter what the building might look like.