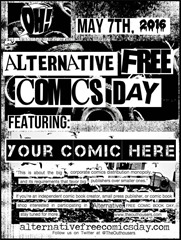 Today is Free Comic Book Day! If you head down to your local comic book shop, you’ll find a dozens of free comics on offer. The official FCBD site has the complete list of available titles.

But even though at least one of those titles (2000 A.D.) includes QR codes for downloading more free digital comics, Free Comic Book Day is primarily a print-comics promotion—not exactly a surprise, given that its mission is to get people out of their seats and into their friendly local comic book store in the hope that they’ll buy something there and help keep the stores in business.

This didn’t sit well with some independent comic artists and publishers, however. Those free comics are only free to consumers, after all—comic book companies are the ones who have to pay for them, and cranking out enough comics to put some into every store across the country can be quite expensive. But you know what doesn’t cost money to distribute to everyone everywhere? E-books—or, in this case, digital comic books. Enter Alternative Free Comics Day, with a bundle of 59 digital comics titles available for free download.

Though Free Comic Book Day has been going on for 15 years, this year is the alternative program’s inaugural event. The program only had a month to get ready, but managed to get 59 titles in that time. With a year to get ready for 2017, next year’s Alternative Free Comics Day should have even more titles available. The comics are available as DRM-free CBZ files, and there are free CBZ reader applications available for every platform.

Comic news site The Outhousers explains the program came about to help independent comics publishers who couldn’t afford to get in on the official Diamond promotion.

With the goal of building a self-sustaining platform, the Alternative Free Comics Day website keeps things as simple as possible. Creators and publishers can create an account on the website, fill out a profile with information about themselves and where to find more of their work, and then upload a comic in the popular cbz format. AFCD then takes the comics, zips them up into a bundle, and makes them available for download on Free Comic Book Day. The internet can take it from there, with unlimited distribution and promotion on social media.

Not all the comics are kid-friendly, so parents should be sure to review the comics before passing them on to their kids.