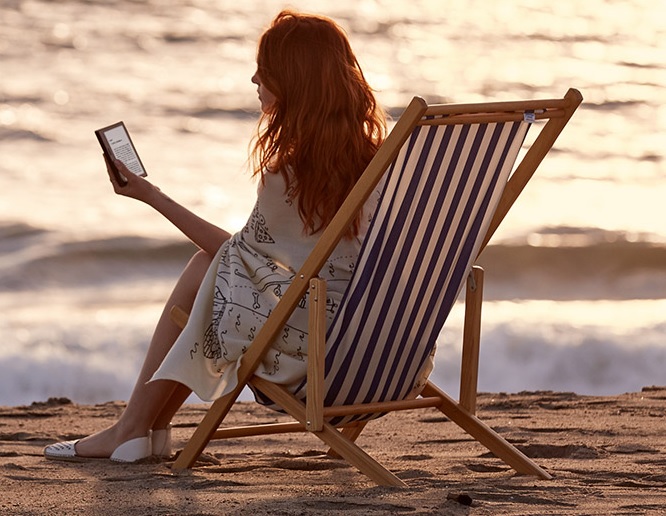 Some interesting perspective on the Kindle Oasis release courtesy of business and financial press raises some questions about Amazon’s ambitions with this device. Because you can’t help noticing that Amazon has just … ahem … book-ended the release of a super-cheap smash hit multi-purpose tablet with what may be the world’s most ostentatiously luxurious high-end epaper ebook reader. So which target is Amazon aiming for here? Both at once?

Do recall, incidentally, that the first-generation Kindle, issued in 2007, cost $399. The second-generation Kindle DX, released in 2010, cost $489. The Kindle Oasis is still a bargain compared to those. Chris Meadows may legitimately ask whether it really is worth it, but consider the following. MarketWatch runs an article, “Amazon Kindle owners are repeat buyers,” approvingly quoting Slice Intelligence research to the effect that “over the past six months, 41 percent of Kindle sales were generated by people who already own one of the devices.” With that kind of traction, Amazon may have calculated that it can happily take a chance on a premium version of its proven product, which, some claim, does not offer that much more in terms of technology, and if so, presumably doesn’t cost a whole lot more to produce. And in the process, Amazon gets to segment its audience further, and bolster its e-reader business with some lucrative upselling.

Because the positioning of the Kindle Oasis is so screamingly obvious that MarketWatch also runs a Ron Burgundy comparison. You have The Guardian running an article with the headline “I’m a professional bookbinder. Amazon’s new Kindle won’t put me out of business.” Actually, I’m sure that Colin Hill Urbina could do a roaring trade in bespoke bindings for Kindles, tablets, and other e-reading devices, even with the Kindle Oasis’s leather cover. But the snob value of the Kindle Oasis, I suspect, is likely to stand up well against Apple’s iPad in MarketWatch’s faceoff.

Readers who really care first and foremost about the reading experience might actually go for the new 9.7-inch iPad Pro, according to some analyses, but for those purchasers, Apple fans or not, who always cared most about pizzazz and buzz may happily snap up the Kindle Oasis instead. After all, as Patrick Moorhead, founder of tech consulting company Moor Insights & Strategy, says over at MarketWatch, “undoubtedly, Amazon has done research on price elasticity. Otherwise, it would be foolish to price it where they did.”

And where does that leave the Fire? Still sitting pretty, I reckon. Amazon’s bargain-basement winner will likely continue to burn through the low end of the tablet market. It’s so obviously not a head-to-head competitor with the Kindle Oasis that I hardly need point out that Daimler produces both the Smart car and the Mercedes SLR McLaren Mansory Renovatio. And the new rumors going down the whisper line about other Fire models in the offing are probably a sign that Amazon’s whole tablet/e-reader ecosystem is garnering added buzz and attention from the Kindle Oasis release. And has anyone said anything yet about the production run for the Kindle Oasis? The slipping shipment dates for the device could be an indication that Amazon is being overwhelmed by preorders.

All in all, I expect the Kindle Oasis to be anything but a Fire Phone-style white elephant for Amazon. It may not ship in massive numbers, but it’s probably not intended to. Is it enough to make me eat my words about Amazon killing the category it created – the dedicated e-reader? Maybe not quite. Because the Kindle Oasis elevates the dedicated e-reader into the horse-and-buggy realm of expensive and elegant anachronisms. The Fire, meanwhile, will continue to rage across the lower end. And Amazon will clean up, top and bottom.