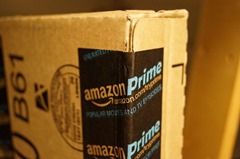 Amazon Prime has a number of useful features: no-extra-cost two-day shipping, a library of video titles to watch, plenty of music albums to stream, and even one Kindle Owners’ Lending Library e-book check-out per month. But up until now, it’s never been available on a monthly basis—except to Sprint customers starting at the beginning of April.

But now it turns out Amazon has just gone ahead and brought the $10.99-per-month price point to all US consumers, as well as an $8.99-per-month Prime Streaming Video only option to compete with the $9.99-per-month Netflix.

Of course, paying on a monthly basis will end up costing you more. For Amazon Prime, it would cost $32 more per year to pay by the month rather than laying down $99 all at once. Even the $8.99-per-month video option would cost more for a year than the $99 subscription.

But as I said in the Sprint story, people with lower incomes might be able to swing $11 per month where they couldn’t blow $99 all at once. If it’s a choice between paying more overall or not having the service at all, I think a lot of customers would prefer to pay what they can afford on a monthly basis. And now that Amazon is offering it to everyone, it will be available even to those folks who can’t afford a smartphone and cellular subscription.