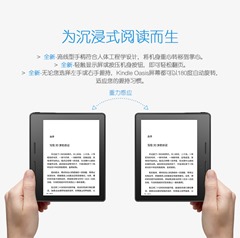 The Kindle Oasis is probably not waterproof, but it seems it’s definitely not leakproof. The Digital Reader reports that, the day after a Chinese leak provided some new information of dubious provenance, Amazon’s Canadian site itself leaked verification that the device is real.

The new leak explains what the “60% more” LEDs means—the Oasis has 10 LEDs, whereas the Paperwhite has 4 and the Voyage has 6. Apart from that, the photo is of the same device the Chinese leak showed, and the rest of the information in the chart matches the details from the leak.

The only thing that doesn’t fit is that the Oasis is listed as starting at $999 Canadian—which is probably a placeholder for whatever the real price will turn out to be. Amazon regularly uses placeholders with ridiculously unrealistic values, such as for publication dates of books it doesn’t have yet. (For example, when I wrote about Look Who’s Back, its US publication was scheduled for the end of 2035—but the US edition has actually been published since then.) There’s no way the Oasis’s real price is $999, even in Canadian money. I can’t see Amazon trying to sell a thousand dollar e-reader that’s not platinum-plated and diamond-encrusted.

It’s also unclear when it’s scheduled for release, but Nate Hoffelder reports a guess of Wednesday—tomorrow. So, stay tuned—our questions about the device may soon be answered for sure. 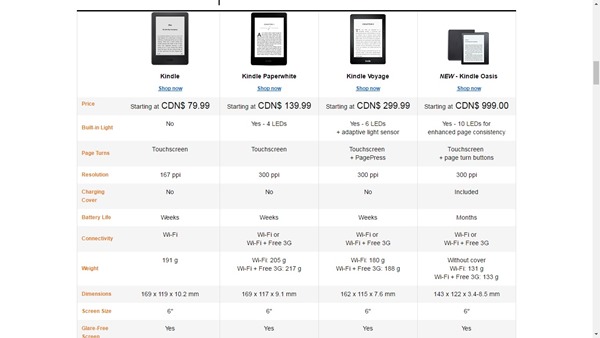