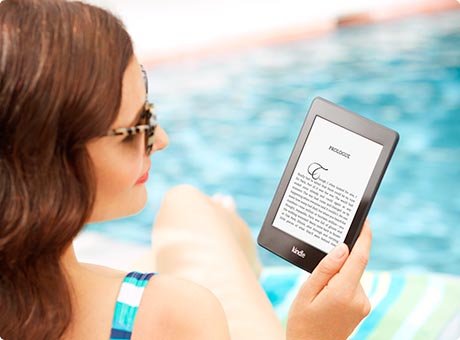 Following the earlier reports inspired by Amazon CEO Jeff Bezos’s tweet about an “all-new, top of the line Kindle,” the Wall Street Journal has run an update quoting “a person familiar with the matter” about Amazon’s new Kindle plans. According to this, Amazon is working on not only its new-generation Kindle, but also a rechargeable protective case, code-named respectively “Whiskey” and “Soda.” Furthermore, there’s a solar-powered case in the offing too, dubbed “Sunkiss” – though the report says this might be a long way off.

The tech press is abuzz with the news of course, though so far few reports have added much to the first WSJ piece. Consensus is that the new device will probably be thinner and lighter, while blogger David Zatz (linked via Liliputing) also talks of possible Bluetooth implementation, and of the device taking the place of the Kindle Voyage.

If the report turns out to be true, Amazon seems to have chosen an odd target for its latest round of Kindle enhancement. Battery life has always been one of the Kindle’s selling points, and power-sipping epaper screens don’t seem in much need of battery life extension. Perhaps Amazon is looking for any means to reinforce the Kindle line’s positioning against its own $50 Fire. Or perhaps, as implied in many of the reports, a new, much thinner, Kindle design needs an optional external battery boost. Perhaps, as the WSJ hints, Amazon wants to promote device churn and get users upgrading to later-generation Kindles.

The solar-powered case, though, suggests another target. One prescient poster on the Kboards wrote: “Now if it was a solar charger cover so you’d never have to plug your kindle in anymore.” Did they have inside info? Who knows? But the solar cover could bring that dream of a totally autonomous Kindle closer to reality.

Further feverish speculation on the Kboards hints at audio implementation to pair with Amazon’s Alexa client and newfound Echo-led voice control focus. But that’s unsubstantiated by the original Bezos tweet or the WSJ report. Still, watch this (Kindle-screen-shaped) space …