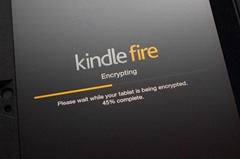 Barnes & Noble isn’t the only tablet e-reader maker making weird decisions lately. The Daily Dot and Motherboard (via BoingBoing) report that Amazon is just about to deprecate device encryption support on its Fire tablets under the next version of the OS. It is advising Fire users what to do to save their data under the new OS. The dialogue window informing Fire users of this change explains that they can stay on the current version of the Fire OS until they are ready to upgrade.

The sort of device encryption Amazon is removing is used to lock up user data on Fire tablets so that strangers who obtain them can’t read personal information. Older Fire devices were relatively simple to encrypt.

Update: Amazon informed Ars Technica that the feature was removed because few customers were actually bothering to use it:

“In the fall when we released Fire OS 5, we removed some enterprise features that we found customers weren’t using,” Amazon told Ars. “All Fire tablets’ communication with Amazon’s cloud meet our high standards for privacy and security including appropriate use of encryption.”

In short, encrypted connections between the Fire tablets and external servers are safe (or, as safe as the server involved and the method of encryption being used will allow for), but thieves and law enforcement officials will be able to grab user data stored locally without much trouble.

This does, unfortunately, make a certain amount of sense. The vast majority of ordinary people probably neither know nor care about encrypting their devices for greater security. Amazon in particular caters to just that sort of person—someone who can manage something just about as complicated as buying an e-book by tapping a button on their screen, but couldn’t figure out how to sideload a book bought elsewhere if their life depended on it. However, device security is important enough that it simply shouldn’t be tailored to the needs of the lowest common denominator.

Oddly enough, as Techdirt points out, this comes right when Amazon’s CTO, Werner Vogels, has been talking about how important it is to encrypt your customers’ data. But from the context, he could just be talking about encrypting it on cloud services, rather than individual users’ devices.

This controversial move comes right when Apple is making waves for resisting the FBI’s attempts to force it to hack the encryption on an iPhone, because doing so would set a precedent making everyone’s digital devices less safe. Needless to say, many Fire users are less than pleased. It remains to be seen whether the uproar will cause Amazon to rethink its position.