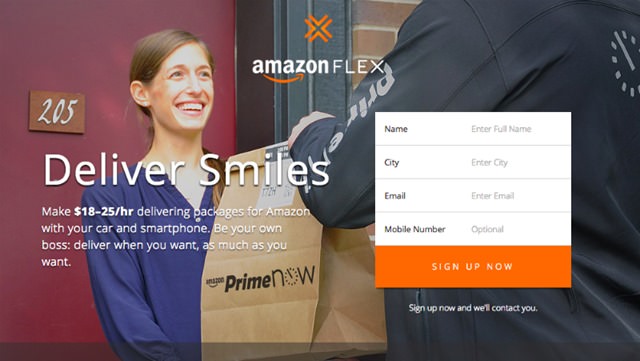 Remember Amazon Prime Now, the service that courier-delivers a subset of Amazon-available goods to you? The Wall Street Journal reports (paywalled; Google the headline to bypass it) that Amazon is attempting to add an Uber-style twist in the form of Amazon Flex. Currently only available in Seattle, but potentially slated to expand to other Prime Now cities including my own Indianapolis locale, Amazon Flex allows people with their own cars to earn a promised $18 to $25 an hour ($18 to $20 an hour in salary, plus the possibility of tips) by signing up to work on-demand shifts to deliver Amazon Prime Now purchases. (Currently, Amazon uses local courier companies.) GeekWire took a look at the local Seattle Flex facility in August.

The Journal points out that this risks exposing Amazon to the same contracted-employee imbroglio currently playing out between Uber and its contractor/employees in Silicon Valley, but Amazon apparently figures it can deal with these issues. And to reassure those who worry Amazon will hand over their packages to just anybody, the company will run background checks on potential Flex drivers, and will monitor their performance and suspend them from the program should there be problems.

I don’t expect that many Amazon deliveries will go astray—Amazon knows all about logistics; that’s how they got as big as they are—but this could provide a whole new avenue of exploitation to worry those who express concerns over Amazon’s warehouse workers. Of course, there’s nothing new about exploitation of delivery drivers, and it doesn’t take Amazon to do it.

Any driver who works for a delivery or transportation service that requires using their own vehicle is effectively wearing out their own car in return for a salary, and that’s been known for as long as pizza has had wheels. That’s one of the real flaws to driving for pizza delivery, or for Uber, Lyft, or similar such services—do you make enough money to cover car repairs after yours wears out, or is your employer offloading what should be his depreciation expenses onto you?

Perhaps worst of all, drivers who do take part in the program will have to live with the knowledge that, sooner or later, they’ll probably be replaced by a drone. (Well, okay, maybe that’s not actually the worst.) Regardless, this represents another Amazon attempt to make physical good purchases almost as quick and convenient as e-book purchases. it will be interesting to see how well it works out.