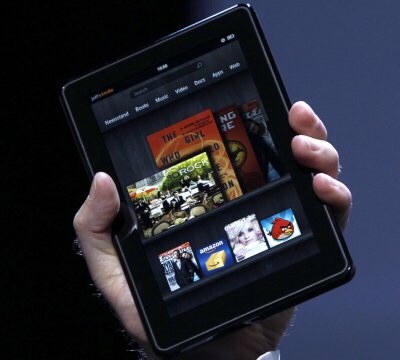 After a firmware update installed itself today, a new notice popped up on my Amazon Fire tablet which included two announcements—one mainly of interest to e-readers, and the other of interest to everyone. The e-reader announcement was the less important one, but it will be important enough to us: Amazon will now automatically store e-books and periodicals you download via the Kindle app on the SD card instead of on internal memory.

E-books you’ve downloaded already will stay on internal memory, but any new downloads will go to the SD card, as long as you keep that option switched on. (It’s enabled by default.) I tried it out with the immense Harry Potter 7-volume e-omnibus, and it semeed to work. I haven’t checked to see if it also works for docs you email in, but I wouldn’t be surprised. That will be convenient to anyone who reads a lot via the Kindle app.

The other interesting bit of news is that Amazon has finally rolled out its “On Deck” program. Announced at the time the $50 Fire originally shipped, this program was intended to download Prime Instant Video movies automatically to available storage so travelers would never be stuck on a long trip, disconnected from Wi-Fi, without something fun to watch. It downloads only as long as the device is connected to Wi-Fi and plugged in. Any downloads show up in the Amazon Video app, and you can see what they are by tapping on the hamburger and selecting “Downloads” from the menu. In my case, my Fire has downloaded Back to the Future for me. Wasn’t that nice of it?

“On Deck” promises it will automatically delete such automatic downloads if space becomes tight. Given that I’ve still got over 47 GB left on my SD card, I don’t see that needing to happen any time soon. I wonder if it will download any other movies for me? On Deck is also enabled by default.

It’s certainly a nice feature, but I kind of wish Amazon would do the same thing for e-books. But then, you’d probably have to subscribe to Kindle Unlimited for that to work, which I don’t anyway.