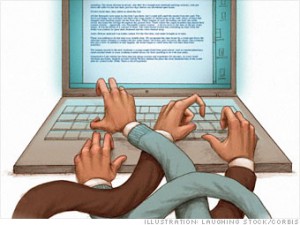 Our friends at The Passive Voice have linked to an interesting little op-ed by author Lili Saintcrow where she weighs in on the Hachette vs Amazon battle, which we have already covered here.

She raises the valid point that publishers rely on pre-sale orders to gauge the probable success of a title, and this affects how much promotion, attention and resources the publisher then puts into the book and the author. From the article:

“Those forecasts create numbers that are used when, for example, Devi makes the case to buy another series from me while I’m finishing up writing the current one. It’s not fair, but it’s the only metric the publishers have in some cases, for all sorts of reasons–frex, it can take over six months for the contracts department to get all situated.”

The part that interested me the most, though? As is usually the case with TPV’s link posts, it’s the comments. Saintcrow paints a very sympathetic picture, but the comments damn her more than I was expecting. Firstly, TPV rightly points out that Hachette, a big corporation themselves, is hardly the cuddly puppy dog here, and has been getting away with paying paltry author royalty rates since time began.

Secondly, the commenters point out that Saintcrow’s assertion that the dispute between Hachette and Amazon is “forcing her to release fewer books” is simply not a given. Hachette could start their own ebook portal. Saintcrow could publish books directly. Nobody has to accept the status quo if they don’t want to.

It was an interesting read. I finished the story proper expecting to see hugs and cuddles for Saintcrow and was surprised to see the comments call her out on her assertions. There is no black or white, good vs bad here. There is just a bunch of corporate overlords trying to navigate their new marketplace, and the authors may be caught in the middle, but that’s only if they choose to stay in that marketplace too. Saintcrow does have other options these days!