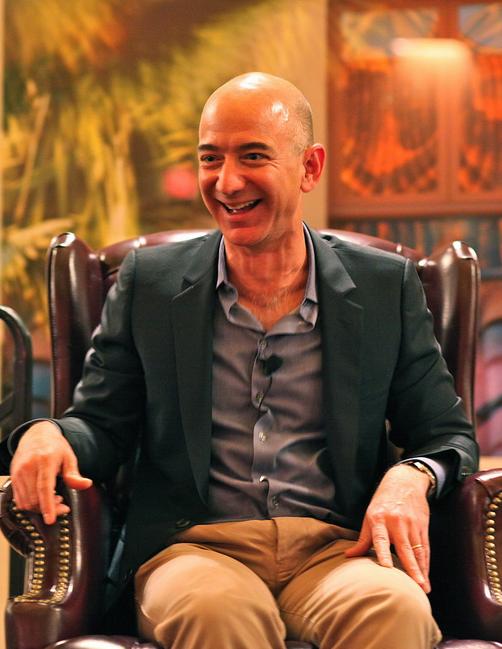 Jeff Bezos has a good reason for smiling today. Those “great expectations” Paul referred to a few days ago have come true: Amazon has released its first quarter earnings report, and the news is awesome. Earnings per share, revenue, and Amazon Web Services revenue all beat expectations.

Indeed, at $1.07, Amazon’s EPS was nearly double the 58 cents that had been expected. $29.13 billion revenue beat the $27.98 billion expected, and AWS revenue of $2.57 billion was just a smidge over the $2.53 billion they’d anticipated. Revenue was up from last year in every category as well, and up 22% overall. Stock prices have risen 12% on the news so far, bringing it to a net gain of 42% for the year. (But I’m sure all those people who advise shorting it will be vindicated sooner or later. Maybe they’ll even have some money left by then.)

Re/Code points out that this marks the first time since 2012 that Amazon has turned a profit in four straight quarters, suggesting that perhaps the days of running on razor-thin margins may be at an end. What will all the naysayers have to complain about if Amazon decides to be profitable from now on?

Amazon didn’t break out its hardware revenues into a separate category, so how well those did in relation to everything else is anybody’s guess. But in any event, Amazon is certainly showing it’s got staying power. One interesting note is that, in North America, Amazon Web Services actually out-earned Amazon’s core business, at $604 to $588. Not bad for a division Amazon originally started simply so it could host its own online services without having to pay someone else for the privilege.

Amazon seems to be in no danger of fizzling any time soon, so all the people who rely on its ecosystem for e-reading can breathe easy again. I wonder what the next rabbit it pulls out of a hat will be?