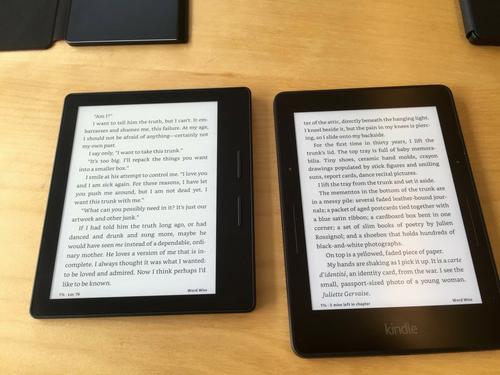 That’s one of the more active debates on the Kboards right now, kicked off by Kboards member denodan, who declares: “What a ripoff the Oasis about $100 more than the voyage. No thanks a total waste of money.” And the responses to this claim are a good chance to evaluate the Kindle Oasis’s strengths and weaknesses, and whether it really does justify its price tag.

Note that denodan is coming from New Zealand, which explains his call on pricing. Currently, U.S. pricing for the Kindle Voyage is $199.99 and up, versus $289.99 for the Oasis. Still, the debate remains the same – and it’s interesting to see what satisfied Kindle Oasis owners have come back with to counter his point of view.

Kboards member KimberlyinMN, for instance, replies that “I also returned my Oasis because I found the Voyage screen to be better to me.” This does highlight one obvious issue with the Kindle Oasis – its screen is not wildly better than other Kindles. This also echoes the point made in TeleRead that screen contrast on the Oasis is actually (slightly) inferior than that on the Kindle Paperwhite, which retails at just $119.99. That said, the adaptive lighting on the Voyage, loved by some, is no advantage for its screen with others. Andra states: “I tried the adaptive light sensor on the Voyage, but it annoyed me more than it helped because I couldn’t get it configured properly so I turned it off. I don’t miss it all on the Oasis.”

For others, though, the ergonomics of the Kindle Oasis are critical pluses. Kboards member Atunah observes: “Its important to figure out for ones self what are the features one needs. I need and must have buttons, non negotiable. I must be able to hold the device without pain in my wrists and joints.” Hence the importance that others highlight of trying out a physical copy in the store, if you can, to see how well it suits you personally. Even seasoned Kindle user kschles who “really didn’t need another kindle,” adds: “Got the Oasis, and was blown away. Size, weight, battery cover, buttons. It all works for me better than any other kindle I’ve had.”

There are many other detailed remarks pro and against the Oasis in the thread, but for me two stand out. One is that little details like physical buttons really make a big difference to many users. Like them or ignore them, these non-mission-critical features can still be important enough to some users to justify the extra price tag.

The other is that no one would object if the Kindle Oasis had a screen quality that truly reflects its price tag. It’s more than good enough for the purpose, but over three times better than the basic $79.99 Kindle? Absolutely not. The good side of that argument is that buyers can opt for the basic version, and still know they’re not missing out on the fundamental part of the e-ink e-reading experience.