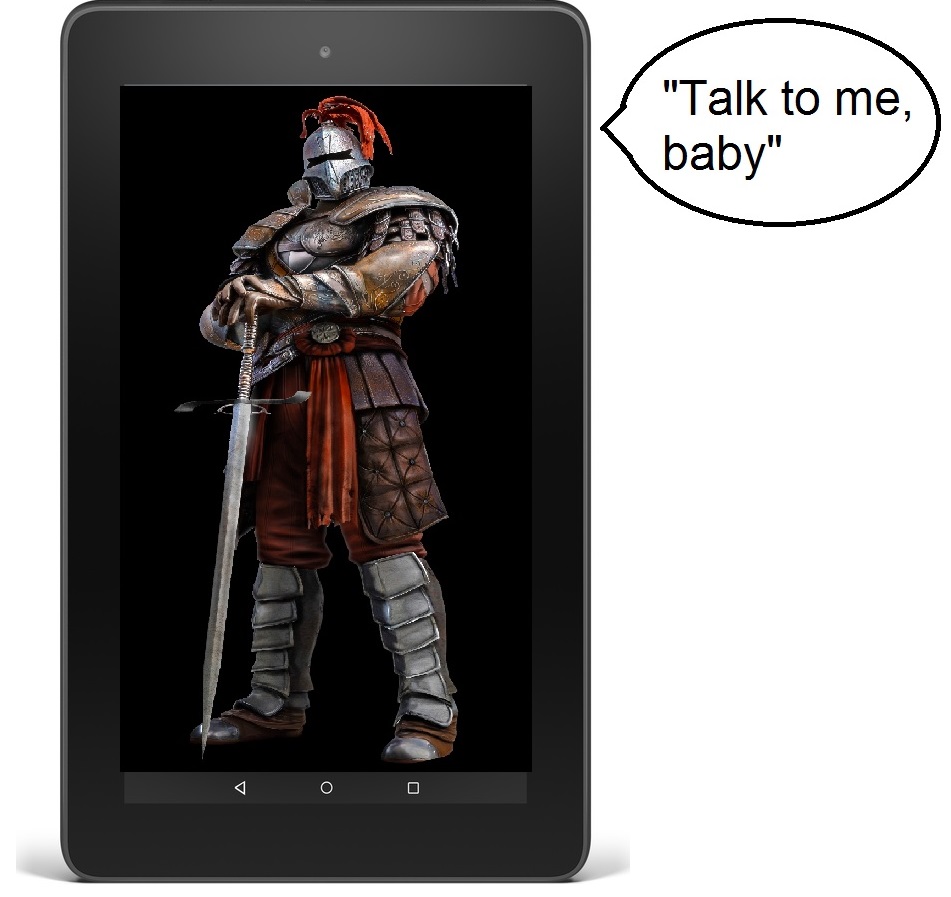 According to a Wall Street Journal report now being widely echoed and reinforced elsewhere, Amazon is working on a next-gen tablet device, codenamed “Knight,” with Alexa on board. The wonder is: Why would anyone find this a startling or breakthrough development? But for those of you who can’t wait for your Kindle or Fire to do Alexa interaction for audiobooks etc., Amazon’s shining Knight may be galloping to your rescue.

As Tech Insider‘s Antonio Villas-Boas remarks, without apparent irony, “Amazon’s voice-powered tablet with Alexa could be similar to the Google Now feature you can find today in Android phones and tablets. You can set Google in Android devices to recognize your voice so you can ask basic questions and commands without having to touch the screen.” Yes, as most Android users have long since cottoned on to, Google Now already allows you to do most Alexa-style voice functions with your smartphone, tablet, or Android e-reader. Google is even trying to pick up the slack versus Alexa and the Echo speaker. And meanwhile, on Apple/iOS you have Siri doing the same, and in Microsoft Windows 10 it’s Cortana. Amazon is already working on Alexa functionality for Fire TV, according to Chris Meadows. It could put the same functionality into Kindles and Fires with a simple app. So far, it hasn’t.

Where Amazon and Alexa have scored is in two areas: expanding the Google Now principle to fullblown home automation, and connecting with Amazon’s huge ecommerce back end for goods and content. It’s even rather surprising that Amazon has taken so long to think about putting Alexa into its tablets and e-readers. After all, as noted above, everyone else does. Still, Amazon’s hardware Lab126 is reportedly working on the device, expected before year end.

Is Knight, if it even exists, likely to offer much in the way of e-reading and other Kool Stuff that you don’t already have? Well, the recent teardown of the new Kindle Oasis didn’t disclose any Bluetooth or voice command functionality, but then obviously Knight isn’t here yet, so who knows if it might be a Kindle rather than a Fire style device? Or a family of products with both e-paper Kindles and color Fire tablets?

SlashGear, however, interprets the original WSJ report as hinting that the Knight could resemble the abortive project for a 14-inch kitchen friendly tablet codenamed “Project Cairo.” Obviously, if that did debut, it would be decidedly different. But with third party developers racing to push out Alexa-enabling apps for Android and iOS, you have to wonder why Amazon isn’t doing the same for its own devices. To protect lucrative sales of premium-positioned Echo and related hardware, perhaps? Who would have thought it …