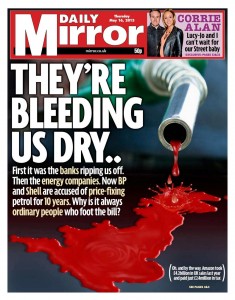 UK press, politicians and public all seem heated up about Amazon’s tax bills in the UK—or lack thereof. Seems those deceitful corporations have been daring to incorporate and structure across jurisdictions, rather than standing meekly inside good honest British borders and reaching their hands into their pockets whenever that nice Mr. Osborne tells them to. Whisper it not, but rumor has it that some of them even have profit motives. Scandalous, I know.

Politicians eager for scapegoats to fling before an electorate grumbling under the weight of misgovernment have seized on Amazon, Google, et al, as a Godsend. Watching them posture against the very people they ply with grants and incentives to come and invest and employ is almost as educational and edifying as watching a dog chase its tail round a lamppost. (“Amazon UK given £2.5m in govt grants = £1.3k per high street bookshop,” tweeted @saltpublishing.) But it distracts voters’ attention, I guess.

The prime concern for me is not tax liability at the corporate level, but at the product level. Companies can legally treaty-shop across borders for the best tax breaks until we finally arrive at the nirvana of an international tax monoculture. But with the virtualization of e-books and similar wares, local taxation, like local copyright, becomes not only harder to administer, but also harder to justify.

Why pay Belgian rates to download a e-book from France? And why shouldn’t continental Europeans benefit from the UK’s zero percent Value Added Tax on printed books? What right does any European government have to tax an object written and edited in the U.S. and distributed through a global network that may not even warehouse any data in their country. (And yes, I know Amazon sells other things besides books, but I bet headline-readers are thinking of books first and foremost when they clock Amazon on their tabloid billboard.)

And there are perfectly legal ways around the problem. “Increasingly, non-EU companies are turning to agency agreements with local distributors to avoid the burden of charging and complying with VAT,” notes website VATLive on non-EU companies’ VAT on electronic services, books, video, apps and software. “This is perfectly lawful, and shifts the burden of the tax compliance to the distributor.”

National jurisdictions are simply incompetent to deal with these matters any more. National politicians clearly are. But I have a solution for those lost tax revenues. Instead, how about a carbon tax on politicians’ wasteful and environmentally damaging emissions of  hot air? Now I’d vote for that.