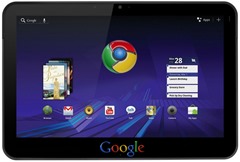 On TechnoBuffalo, Todd Haselton reads a big cup full of tea leaves to wonder if Google is getting out of the Android tablet business based on simply not saying much about tablets during the Google I/O keynote. Given that Google is making a big deal out of getting Android apps running on ChromeOS, and the Pixel C tablet was apparently meant to run ChromeOS to begin with, maybe Google is planning on switching over to Chrome tablets instead?

To me, that seems like a fairly big guess to make based on fairly little data. There could be any number of reasons Google didn’t talk up tablets, such as the way expensive tablet use seems to be dwindling in favor of smartphones and cheap tablets like the Amazon Fire. It doesn’t necessarily follow that it’s going to switch its tablet focus over to Chrome. Honestly, I’m a bit dubious—Chromebooks never really took off to the extent Android did, so why would Google suddenly switch over to emphasizing them?

Haselton thinks it’s for the sake of competing with the better productivity options offered by Windows 10, and it’s possible there could be something in that. Android isn’t great when it comes to productivity—especially given the Android versions of the Google Office apps lack key features—but ChromeOS offers a more desktop-like experierience.

But the thing is, it may not fundamentally matter, if Google’s serious about getting Android apps running well on ChromeOS. If that comes to pass, then every e-reader app out there should run just fine on these new Chrome devices, and they’ll still be able to focus on the same e-reading tasks they ever have. So for those of us who use them as e-readers, it might not make that much of a difference.