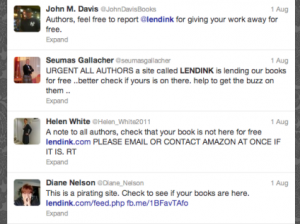 The LendInk Debacle has been a huge story on the reader message boards over the last few days. I have some links I’ll share with you, but first, I want to back up and explain what happened, because I think this is a hugely important lesson for both authors and readers in reading the fine print, thinking before you speak and post, and conducting oneself on-line in a professional and appropriate fashion.

LendInk was a social networking site that facillitated lending of Kindle and Barnes & Noble e-books. They did not host the books themselves. They did not deal with the actual book files in any capacity. All they seemed to do was cull the listings of books which were marked lendable by the author or publisher, and provide buttons where those who wanted to borrow or those who wanted to lend could be hooked up with each other. The potential lendor would be redirected back to Amazon or Barnes & Noble, where they could lend the book using that store’s lend function in the usual way.

So, Phase 1 of the sorry mess:

Some authors get wind of this “book lending” site and wave the banner of “Piracy, Ho!” without considering a few important factors:

1) The site did not actually host or lend any books at all. This was the digital equivalent of the ride boards that proliferate on university campuses where people can post that they want a ride somewhere (or conversely, that they will be driving somewhere and are willing to offer a ride). The ride board itself does not transport anybody into a car. It simply provides a forum for connecting Party A with Party B. Likewise, LendInk did not host anything, did not pirate anything, and did not interact directly with any author’s book.

2) The authors’ own contract with Amazon permits the book to be lended. Where many authors seem to have fallen into the path of righteous indignation here was failing to realize that this permission had been granted. Either they ticked the lending checkbox without understanding what it meant, or they missed the fine print altogether because they signed up in the 70 percent royalty category, and all those books are eligible for lending by default.

3) The lending is also not a carte blanche fileshare. Typically, it is restricted to the one purchased copy being loaned one time, for a period of 14 days, and then that’s it. The buyer can only share the book the one time. If he or she knows other people who want to read the book, they have to buy it the same as he did.

The unfortunate result of these author misunderstandings? A virtual lynch mob with authors tweeting back and forth about the evil pirates stealing food out of their mouths, and a mass of indignant emails that overwhelmed the ISP of LendInk’s founder and caused them to shut the site down.

The readers find out. And they decide to retaliate with a lynch mob of their own, to teach those authors a lesson …

Here is a link about the war on the reader’s front, and here is a post on behalf of the authors. There is some graphic language in these exchanges. There are authors and readers behaving like little children here—name calling, insulting each other, vowing vengeance and blacklisting. It’s horrifying.

My own feeling on this is that both sides behaved badly here. I do think that many authors got caught up in the lynch mob mentality and failed to do their due diligence before they posted into the fray. But with that said, we are still in the prehistoric era of digital publishing here, and I think some of these authors truly did not understand that what LendInk was doing was legal, permitted and a far cry from ‘piracy.’ I do think most of these authors would benefit from valuing their work enough to treat it like a true professional would and educate themselves about some of these logistics before they put their work out there on the market.

As for the readers … well, the best I can say about that is, Two wrongs don’t make a right. I think that we all need to behave like grown-ups here. Trying to give authors the tools to educate themselves on their own rights and those of their readers will be more helpful than deluging them with name-calling and one-star reviews to shame them into apologizing.