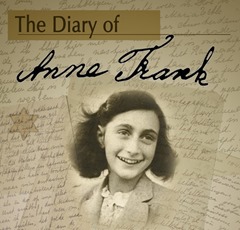 We’ve already mentioned several times that the copyright situation surrounding The Diary of Anne Frank is ridiculous, but I didn’t understand quite how ridiculous until I read this op-ed from Ars Technica UK.

Glyn Moody writes that the situation is so complicated because of the existence of three published versions of the diary—the version as Frank originally wrote it, a version she started to rework into a novel, and the version compiled by her father Otto Frank for later publication, out of material from both of those. For simplicity, Moody (and his source material) refers to these as versions A, B, and C, respectively.

All three versions have been published, but the copyright fuss centers around version C. Under the standard life + 70 copyright term, the Diary should now be in the public domain. However, the Swiss foundation Anne Frank Fonds claims Otto Frank should be considered a coauthor of the version-C Diary as published. Since Otto outlived his daughter by several decades, that would set the life + 70 expiry back to 2051. This extravagant claim hasn’t yet been litigated, so it’s anyone’s guess how it will actually turn out.

Meanwhile, the “original” versions A and B of the Diary are still locked up until 2036 in most of Europe, because of special rules concerning posthumously-published material that were in effect at the time they were first published in 1986.

Anne Frank Fonds is significantly invested in keeping the Diary under lock and key for as long as it can, to the point where has even (unsuccessfully) sued another Anne Frank-based foundation, Anne Frank House in the Netherlands, for violating copyrights by researching the original Anne Frank manuscripts.

Meanwhile, in Poland, those special rules aren’t in effect. Versions A and B are definitely in the Polish public domain at this point, and Polish organization Centrum Cyfrowe has posted them in e-book form for people to read online—but only to people accessing them from IP addresses physically located in Poland. It uses the very same geoblocking that Netflix uses to disallow extraterritorial viewing to prevent people in parts of the world where they aren’t public domain yet (including the USA) from reading them. Centrum Cyfrowe is using the situation to call attention to the ridiculous patchwork nature of copyright in the European Union.

The European Commission has said that it would “initiate action to put an end to unjustified geo-blocking” as part of its proposals to update copyright. It’s probably too much to hope that addressing the kind of copyright mess described above would be part of that. Which means waiting a few more decades before Anne Frank’s diary finally enters the public domain for everyone in the EU.

I’m skeptical that copyright can ever be harmonized in such a way. Among the countries in Europe, maybe, but We’ve already had treaties such as the Berne Convention that were supposed to, but everyone sets their own different durations on it—and the USA has one of the most obnoxious ones of all. And as long as copyright isn’t harmonized globally, there will always be the need for geoblocking—or else simply acknowledging the fact that it’s ridiculously easy in a digital world for people to violate copyright by accessing works that are under copyright where they live or in the public domain somewhere else.

For example, I, or anyone else from the United States, could routinely violate copyright just by clicking this link to The Case-Book of Sherlock Holmes (PDF), in the public-domain in Europe and Australia but not in the USA for another decade or so. It’s perfectly legal for the website sherlock-holm.es to host it, given that the website is in Spain (or at least its domain name is), but reading it if you’re not somewhere that it’s in the public domain is against the law. (Don’t do it! Don’t be naughty!)

This puts the Conan Doyle estate in the ironic position of having its last feeble grasp of its progenitor’s copyright in a country thousands of miles away from home. (Rendered even feebler by the Supreme Court declining to consider the appeals court ruling that the estate couldn’t use its copyright on that last bit of material to keep people from writing works based on the rest of it.)

And there are plenty of other still-in-copyright-here works you can find the same way. The later works of Edgar Rice Burroughs, for example. Most sites don’t bother to geoblock—but then, e-book stores didn’t restrict customers from buying things that weren’t supposed to be sold in their region either until April, 2009, more than ten years after e-books first started being sold. Might deceased authors’ estates start tightening up that kind of thing to try to prevent these works from leaking into the still-quite-significant USA?

In any event, the controversy surrounding The Diary of Anne Frank doesn’t seem likely to end soon. It remains to be seen whether the copyright mess can be made any less messy.