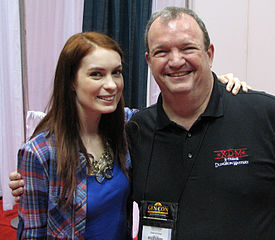 A blurb on The Passive Voice links to an article at Sciencefiction.com where author Tracy Hickman of Dragonlance fame offers ‘sobering news’ for aspiring authors.

The news is that being a full-time fiction author is really hard work, and doesn’t earn as much money as people think it does, which I suppose has to some degree always been true. And, to be fair to Mr. Hickman, he did contribute to the comments and clarify that his quote was taken out of context and he was not complaining so much as explicating on a reality.

But, as I am increasingly finding in stories like this, it’s in the comments that the true story lies. Halfway down the page, an astute commenter named Kara makes the clincher observation:

“I remember listening to a podcast interview years ago with Hickman where he talked about a new ebook subscription system he had developed where you could read each chapter as it was written and get a print book at the end. I had never read his work, but listening to him talk – his enthusiasm was contagious and I went to the site to check it out. The $50 cost wiped out all that built up interest I had from the interview. From looking at his site now, it seems like pricing may be part of the problem.”

A few comments later, Mr. Hickman himself weighs in:

“I’m not TRYING to charge $48.00 a piece … I’ve succeeded in charging $48.00 for each collectible book AND I’ve sold the mass-market rights to a publisher on top of that. So I think I’ll skip the remedial economics, thank you all the same.”

I’m sorry, but I just don’t understand why this guy thought this was the road to take. This is an ebook-based model. The goal should be getting more people to read, not creating artificial scarcity via a ‘limited edition’ sort of deal. There may be many things he is doing right as an entrepreneur, but this isn’t one of them. He may be selling some at this price point, but he could probably sell more—-and build more of an audience for future sales—if he focused on many copies at a lower price point, not fewer copies at a high one.