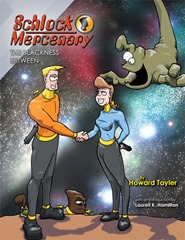 At Gen Con this evening, I got to spectate as Schlock Mercenary webcomic artist Howard Tayler and several other players took part in a playtest/demonstration session of the upcoming Planet Mercenary RPG. This RPG, financed by Kickstarter, lets players run a band of mercenaries adventuring in the universe of Schlock Mercenary. It was a lot of fun to watch; I can’t wait until it’s available to everyone sometime next year.

After the game, Howard and his wife Sandra were talking with the players and spectators, and the question came up of when the next Schlock Mercenary comic collection would be available as a PDF e-book. (Howard discussed these e-book editions when I interviewed him for TeleRead a few years ago.) The Taylers explained that, at the moment, the e-books were in limbo, because of the new VAT MOSS requirements.

As we discussed in the podcast interview with Diane Duane, the new EU VAT MOSS law went into effect at the beginning of this year, changing VAT on digital goods from being charged based on the location of the seller to being charged based on the location of the buyer (so that Amazon could no longer get away with charging everyone Luxembourg’s low VAT rates). This meant that even US stores that sold to anyone in Europe would now have to track the buyer’s location in order to charge the appropriate amount of VAT, and keep records. (We quoted a series of tweets from Howard Tayler discussing the matter last year.)

The thing is, the Schlock Mercenary e-commerce system is not set up to track location until after a purchase has been made. Hence, at the moment, the e-book category on the Schlock shop is completely empty—they can’t sell to anyone in an EU country without violating the law, and they can’t tell if someone is from Europe before they close the sale. Therefore, they can’t sell them to anyone right now. (The first four Schlock PDFs are still available from Baen, however; presumably Baen has better methods of location authentication.)

Diane Duane could simply have her accountant VAT-register her store, but she’s in Ireland where the accountants have plenty of expertise with the VAT system. Not all American accountants are that familiar with it—and that’s leaving aside the issue of the incompatible software.

Of course, they could simply switch the store over to new software, and put in the time and effort to figure out how to readjust their store to track the required VATs—but they’ve got plenty of other stuff on their plates right now (a comic to draw, another strip collection book to finish, an RPG to design). And given that the VAT laws are expected to change again next year, it makes more sense to hold off until things are more settled so they don’t have to waste extra time changing everything up twice.

I wonder how many other small e-book stores in the US and elsewhere have had to stop doing business with Europe or even shut down altogether because they simply can’t afford to deal with the new VAT bureaucracy?