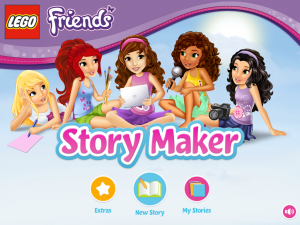 A very sweet valentine gift from the Beloved has ignited a new obsession with me. I have become a Lego fan! So when I saw this neat-looking app from the Lego people, I was all over it and downloaded it for our school iPads. Lego and literacy skills building all in one app? What a great idea.

The app is simple in concept and execution, but cleverly conceived. It allows kids to write their own little ebooks and illustrate them using characters and settings from the Lego Friends series. Once you have the project set up, all you have to do is press the plus button to add a new page, pick a background for it, add the Lego pieces and then type your caption. You can also add page borders, stamps, voiceovers and a few other frills.

The app is somewhat customizable. You can change the text color (but not its position on the page) and access your device’s photo roll to add your own pictures. The ‘publish’ option gave me the choice to export to iBooks, Google Drive or Dropbox; it wasn’t clear from the app description if other choices were available, but these were the choices I has based in what was installed on my device.

The app was friendly to young children too. There is a voice recording function so that pre-writers can record their story orally, and certain functions (such as the Publish one) have a rudimentary parental control. This control (holding down the button for two seconds) is easily bypassed by any child who can read, but it will at least prevent your Lego-loving toddler from getting too far afield. 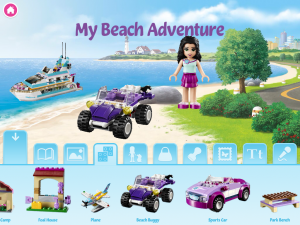 I also liked that the app (which was free!) was complete and did not require in-app purchasing. A growing number of kids apps are starting to advertise the lack of in-app purchasing as a feature, and I admit, it’s something I look for. If it’s a paid app, and I want it, I will pay for it. But I would rather do that all up front and not have to worry about nickel and diming later. And nothing interferes with a teaching lesson more than having to unlock 16 iPads mid-lesson! I much prefer being ready to go all at once.

I have only two small complaints. Firstly, the clip alert choices are inherently limited by the app’s theme: products available as part of the Lego Friends line. Only ten backgrounds, for example, doesn’t give one huge scope for storytelling.

Additionally, I have found this product line very girl-skewing. It’s all pinks and purples and pastels. One of my students brought some in to show me, and I tried to incorporate it into one of my lessons since I do a lot of context-based vocabulary teaching with the kids. The boys in the class would not go near it! If you are a parent with a little girl, this may very well be the app for you, but from an educator standpoint, the app might have somewhat limited uses.

Great concept, good execution, and for a child who likes this sort of thing, this is a great free app. A little less gender stereotyping might give it a broader appeal, but that’s the fault of the Lego Friends product line, not this app specifically.