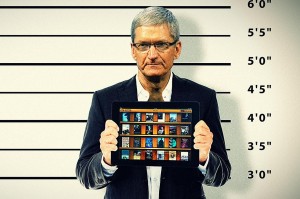 Reading the latest news, it seems as if the actions taken by Apple in its earlier attempts at price fixing have always been obvious. It may come as a shock to some that this has not always been the case.

The events that played out at the beginning of the post-Kindle e-book era have been tumultuous at best and downright ugly at their worst.  There was a clear and concerted effort on the part of our country’s largest publishers and one of its largest tech companies to underhandedly force artificially high price points on customers.

In the past, the story may very well have ended there, with potential customers powerlessly taking the price increases. It did not, however, play out the way that the large publishing houses and Steve Jobs envisioned. Instead, what occurred is that a divided customer base, with disparaging interests, united in an open revolt of these corporate tactics. Their complaints resonated with such force that one of the largest retailers in the world–Amazon–single-handedly picked up its cross and ran with it as far as a publicly traded company could possibly carry it.

This movement proved to be controversial to some people at the time. Cynics quickly weighed in on the boycott’s characteristic tactics of calling out books that should not be purchased and of also giving price-based one-star reviews. They labeled these methods as destructive to not only freedom of speech, but to also the concept of a free market. They stated that these actions inherently interfered with the relationship between publishers and customers. The reactions that these criticisms garnered were equally harsh, with many boycotters actively pushing accusations that critics were in some instances members of an insidious publishing astroturf campaign.

There really is no way to determine whether or not publishers went as far as using subversives. The fact that they have been proven to have colluded in one way or another to remove consumer choice is in itself a troubling reality.

It may not be the popular thing to say, but the $9.99 boycott was right at the time and it is right in retrospect. Consumers may not always have their interests represented fully by large corporations, and the boycott continues to serve as a prime example of the collective influence that consumers can have when they choose to unite.

The writer and editor Alex Sanchez, an occasional TeleRead contributor, can be found on the Web at upfromnothing.com.