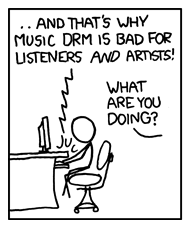 The wheels of justice grind slowly, and sometimes a bit of grit gets stuck in the gears. This seems to be the case with the ten-year-old lawsuit against Apple over the DRM policies it used to enforce on iTunes Music Store music and iPods. Over the last couple of weeks, it’s started moving again, and the testimony and depositions have been interesting to follow. But now it looks as though, just as it’s getting started again, it may come to a complete halt.

At heart, the case has to do with the way Apple continually changed its DRM to close loopholes other music stores attempted to use to force iPod compatibility with their own DRMed music. The iPod would, of course, play DRM-free music from any source (such as ripped from CDs, or sold by sites that didn’t use DRM—which was strictly indie music way back then), but the whole Napster thing still stung so badly that the labels insisted on DRM.

So, Apple sold its iTunes music with DRM, and every other store that worked with the major labels, such as RealNetworks, sold their music with DRM, too. The problem for every digital music store that wasn’t Apple was that when it came to digital music players, there was the iPod and then there was everything else—and only Apple could sell music for the iPod. Hence, Apple was the first poster boy for digital media platform DRM lock-in, back when the Kindle was still just a twinkle in Jeff Bezos’s eye.

About the only thing competitors could do was try to create their own digital music players, but it cost a lot to develop portable hardware, and Apple had already cornered the market on the miniature hard drives that gave the iPods such a huge storage capacity. And thanks to the network effect of the most popular platform becoming more popular the more people used it, they had a huge first-mover advantage, so no one else could hope to catch up.

RealNetworks thought it had a clever way around that, taking advantage of a loophole in Apple’s DRM to slip music into their iPod on the sly while still keeping it DRM-protected. However, as soon as Apple noticed, it immediately altered its DRM to close the loophole. (Apple would do this again, years later, when Palm tried to use iTunes as an unauthorized sync conduit for its new Palm Pre phones.) And so, a class-action lawsuit was born.

Apple: Blame the Record Labels, Not Us

We’ve seen some interesting testimony in recent days. Apple executive Eddy Cue, best known to us in recent days from his role in the events that spawned the Apple anti-trust case, testified that the record labels insisted on the DRM, whereas Apple wanted DRM-free interoperability. It was only in 2007, after iTunes turned out to be popular enough that the labels began to regard it as a monopolistic threat, that the labels’ attitude toward DRM thawed. Soon competitors such as Amazon, then Apple itself, were able to sell music DRM-free.

Steve Jobs said something similar, in a video shown to the court but not released to the public:

"We had pretty much black and white contracts with the labels," Jobs said in the deposition. Those contracts stipulated that if people violated Apple’s FairPlay digital rights management system, a technology that would detect other music stores’ song files and prevent users from loading them onto the iPod, "…that would be in clear violation of the licenses we had from the labels and they could cease giving us music at any time."

Jobs referred to companies such as RealNetworks as “hackers” who could put Apple in noncompliance with record company contracts, something which Apple was “very scared of”.

Tear Down the Walled Gardens?

This is an interesting case, given that it strikes at the heart of an assumption that’s been with us for at least the last ten years: the idea that companies have the right to build and enforce walled gardens on their own platforms. This assumption has held through the rise of the iPod and Apple’s music, the iPhone and Apple’s apps, and most recently the Kindle and DRMed e-books.

When Apple began enforcing its rule that required paying it a vig from any in-app purchases, everyone basically shrugged, said, “What can you do?” and adapted. Their garden, their rules. The closest we came to seeing any sort of legal action about it was when the DoJ suggested requiring Apple to drop the vig for a set period as part of the anti-trust settlement and Judge Cote demurred, saying she wanted to tread as lightly as possible on Apple’s business.

There’s been a strong assumption that, as in the story of the little red hen, being the one to bake the bread entitles you to decide who gets to eat it. If this case goes forward, it could call that assumption into question. I wonder if it could have any repercussions for the e-book market? The similarities only go so far—nobody has tried to hack Amazon’s DRM to make the devices compatible with other e-book DRM schemes. (After all, it’s far easier just to strip the DRM altogether.) All the same, the main point of contention about Apple’s walled garden could apply to any walled garden that currently exists.

That said, the operative phrase here is “if the case goes forward.” It seems that, despite representing a class that could consist of millions of people, neither of the plaintiffs in the case actually bought an iPod during the period of time (before Apple dropped its restrictive DRM) that would give them standing to bring the suit.

One plaintiff has already been dismissed from the case; the other might be. (Her iPod was actually bought not by her, but by her ex-husband’s law firm.) If they can’t find a valid plaintiff, the judge might well have to dismiss the case. (I would think that it shouldn’t be hard to find another if millions of people could have been affected, but perhaps some legal issues prevent swapping one in at this late date?)

It would be a trifle anticlimactic if the case got this far and then fizzled. I hope it will be able to continue. It would be interesting to see what effects a ruling might have on other digital media.