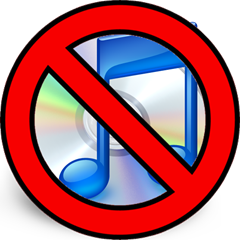 Though this story is about digital music, it’s still the sort of thing that could someday come around to bite people who read e-books, play video games, or use any sort of digital media on their computers. As such, it seems important enough to merit a warning. Composer James Pinkstone blogs that Apple Music deleted 122 GB of songs from his hard drive—and by so doing, it was working as intended.

Like a number of other music services (Google Play Music, for example), Apple Music uploads songs from its users’ hard drives so it can serve that music back to them via the Internet. However, those other services don’t do what Apple does next—delete the music from their hard drives after it’s been uploaded. Songs it recognizes as matching previously-stored songs are replaced with the versions Apple has stored on its servers. Songs it doesn’t recognize are stored and served back on demand. WAV files are converted to MP3s or AACs. And that music is gone from your hard drive.

This has a number of inherent problems. First, it removes the ability to decide when and how to play your music from you, and places it in the hands of Apple and your Internet service provider. Second, Apple often mismatches songs, replacing rare demo and alternate song cuts with more common songs by the same title. Third, getting the music back from the cloud one song at a time would take approximately forever. Fourth, Pinkstone saved his original compositions as WAV files—which Apple converted to less-detailed MP3 files, with the original versions gone forever.

Fortunately for Pinkstone, he was able to retrieve his music from a backup he’d made a few weeks before, but most people don’t back their stuff up that frequently. And even after he had retrieved it, the only way to keep it from happening again was to unsubscribe from Apple Music and tell iCloud not to store any music backups.

For about ten years, I’ve been warning people, “hang onto your media. One day, you won’t buy a movie. You’ll buy the right to watch a movie, and that movie will be served to you. If the companies serving the movie don’t want you to see it, or they want to change something, they will have the power to do so. They can alter history, and they can make you keep paying for things that you formerly could have bought. Information will be a utility rather than a possession. Even information that you yourself have created will require unending, recurring payments just to access.”

When giving the above warning, however, even in my most Orwellian paranoia I never could have dreamed that the content holders, like Apple, would also reach into your computer and take away what you already owned. If Taxi Driver is on Netflix, Netflix doesn’t come to your house and steal your Taxi Driver DVD. But that’s where we’re headed. When it comes to music, Apple is already there.

At one time I considered signing up for Apple Music to be able to download high-quality versions of some albums I’d previously bought in AAC format, but it didn’t seem worth the hassle. Now, I’m pretty glad I didn’t. Google Play Music also stores all my songs on its servers, but it didn’t delete them from my hard drive. I can still sync them directly onto my own devices if I want to.

This isn’t exactly the first time a major company has deleted media from its customers’ devices. Remember the 1984 debacle, in which Amazon removed and refunded illicitly-published versions of Orwell’s e-books from people’s Kindles? Remember all the flak Amazon caught for that, and Jeff Bezos’s apologies and promises never to do that again? Apple’s behavior with its customers’ music makes that look like little Jeffie got caught robbing the cookie jar. And itunes’s Terms of Use will make it tricky for customers to sue Apple over this behavior.

One of the comments below the article notes that this probably came down to user error—Apple Music asks whether customers wish to “Merge” or “Replace” their library when they set up their account, and Pinkstone simply chose the wrong option. However, the choice apparently wasn’t adequately explained, given how puzzled Pinkstone was over what happened. It seems as though it ought to be harder for a customer to accidentally delete all his own music like that.

What if Apple started deciding that any e-books you’d loaded into iBooks didn’t need to be on your hard drive anymore and automatically erased them without asking? Granted, that’s not likely given that e-books don’t take up much space, so there wouldn’t be any point in trying to free it up, but it’s the same idea in principle.

This is why consumers who use digital media and the cloud need to be on their guard about media companies overstepping their bounds. Back your media up if there’s any chance of it getting erased. And now that you know about it, I’d strongly recommend not using Apple Music until and unless they correct their service’s behavior. Google Play Music works just fine for me.