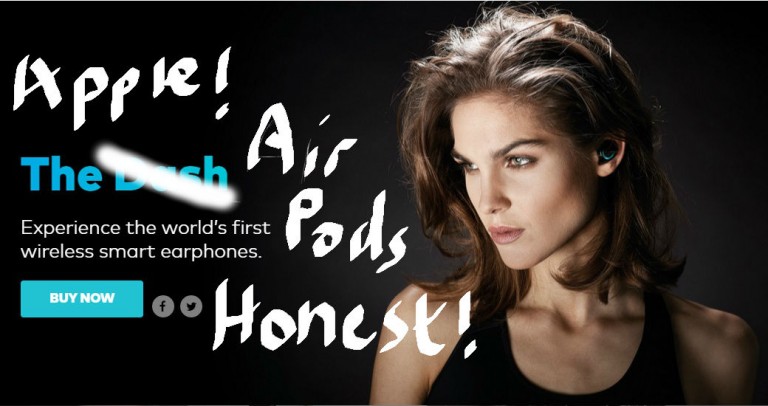 It seems that the Apple Reality Distortion Field which made the extra few eights of an inch on the iPad Mini a stunning technological breakthrough has been turned on again. This time it’s the rumored Bluetooth wireless earbuds that may or may not be packaged with the also-rumored iPhone 7. One eager headline writer is already describing these as “revolutionary.” Well, except for two things. The first, and obvious one, is that they don’t exist yet. The second is that other manufacturers have already debuted the technology.

The underlying issue, according to a more balanced report in 9to5mac.com, is that Apple wants to drop the headphone socket from the iPhone 7, in order to make the device even slimmer. iPhone fans then face a choice of either using corded earphones with a Lightning connector to the iPhone’s charge socket, or of using cordless Bluetooth earphones. And, states the report, post its acquisition of Beats Technology, Apple may be developing a pair of completely cordless earbuds, without even linking wires or other connectors, under a monicker it’s already trademarked: AirPods.

Bragi has already rolled out such earbuds, 9to5mac.com points out, in the shape (shapes?) of the Bragi Dash, described as “the world’s first wireless smart earphones.” So has Motorola, at least halfway, in the shape of its ear-dwelling Bluetooth headset the Motorola Hint, designed to cosy up to your auditory canals almost invisibly, which has been around since 2014. Other highly fanciable variants include the Earins, or even the slightly clunkier Onkyo W800BT buds. And it won’t be too much of a stretch to imagine that even more earphone makers will have implemented such tech by the iPhone 7’s expected incept date in fall 2016.

To judge by these first headlines, though, all that won’t stop Apple’s squadron of press drones formating on the line that wireless AirPods are “revolutionary.” Once again, Apple fans listening to their audiobooks on their AirPods look doomed to be the children of yesterday’s revolution.