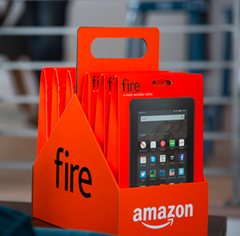 Might the six-pack of $50 Fire tablets be Amazon’s way of slipping into the education market via the back door? The Motley Fool’s Adam Levy thinks so, pointing out that schools have been making more and more use of tablets lately, but iPads are just so expensive and schools do have limited budgets. Given that not many people have families large enough to use all six tablets, Levy thinks schools might be the natural target for that bundle.

Of course, Amazon’s margin on those tablets is pretty low, and even if it sold millions of the tablets to schools, it wouldn’t make very much money on the deal. But the real value proposition for Amazon could simply be the ability to get kids used to working with its tablet ecosystem, and primed for moving on to other Amazon devices as they get older.

I’m not so sure Adam is really on the money here. iPads have a really good reputation as educational devices, after all, and have built up a considerable library of quality software to aid in that purpose. Does Amazon’s software library have the educational chops necessary to compete?

Amazon’s hardware is known for something considerably different than education—it’s known for advertising Amazon’s own products, especially given that the $50 version of the tablet comes with Special Offers enabled. It seems to me that exposing kids to more advertising, even passive advertising of the getting-kids-used-to-using-Amazon’s-services variety, is not the sort of thing schools would want to be a party to.

Besides, Levy’s idea that families would want to buy those six tablets exclusively for their own use may be built on a false premise. There are plenty of large families out there, after all. (Indeed, one of my brothers has enough kids he could buy the six-pack and not even have a tablet left over for himself or his wife.)

But even families who don’t have that many kids will have more than enough friends and relatives that they wouldn’t have trouble finding a home for any extras—especially with the Christmas season almost upon us.

It’s also possible some people might even want to put aside some of the tablets as spares in case they lose or break their “main” ones. After all, a $42.67 tablet is so cheap as to be practically disposable—so maybe you take some extra chances with it, and maybe it breaks, so it might be a good idea to have a replacement already on hand.

The point is, I don’t think it’s necessary to assume that families won’t buy into those six-packs, therefore they must be aimed at an education market. More than likely some schools will be interested, but I suspect that more than enough families and even individuals will want to buy the bundles for that not to be an issue.

Levy posits that “there isn’t much consumer demand for bulk purchases of low-end tablets,” but who’s even made low-end tablets available for discounted bulk purchase so far? On Polygon, Ben Kuchera calls the six-pack idea “one of the most exciting things [Amazon]’s ever done,” positing all sorts of potential uses for six very cheap tablets.

Buy one and attach it to the wall in your kitchen for recipes, and keep it there. It’s only $50. Use it as an e-reader that you aren’t scared to use in the bath tub. Let your toddlers play with it. The sky is the limit here, and the use case is any situation where you need a moderately powered tablet but you’re too nervous about using a full-priced model.

Maybe it will turn out there’s more interest than Levy expects.