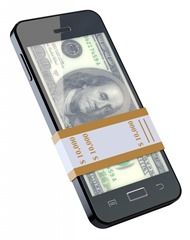 Other than e-books, one thing people read a lot—especially on mobile devices—is news. However, newspapers are still having a hard time monetizing their online portals, and some interesting statistics suggest a few reasons why they’re running into trouble.

Reuters recently polled 1,230 readers to find out how they read news online, and ran across some interesting things. Most notably, Reuters found people want reliable, quality news sources—but they don’t want to pay for them.

Although 81 percent of respondents said that a news brand is synonymous with trusted content, with nine out of 10 of them turning to a particular news brand to verify breaking news, two-thirds of them said they wouldn’t be willing to pay for any online content, regardless of quality.

If they aren’t paying, what about advertisements? The news isn’t so good there, either. The Nieman Lab reports on a paper from Kalkis Research discovering that a number of sleazy websites exist to game the algorithms ad-companies use to place ads. Most users are directed to low-end web sites, but when a user whose IP address places him in a high-value category clicks on an ad, these systems route him through several web sites in quick succession, so as to make those sites look better in Alexa and earn them better ad dollars.

These are exactly the kind of thing that leads more and more people to install adblockers, which in turn kills advertising revenue. Anti-adblock outfits like PageFair recommend that news organizations should think of the needs of their users and not just push ads at them, but it remains to be seen if anyone will listen. 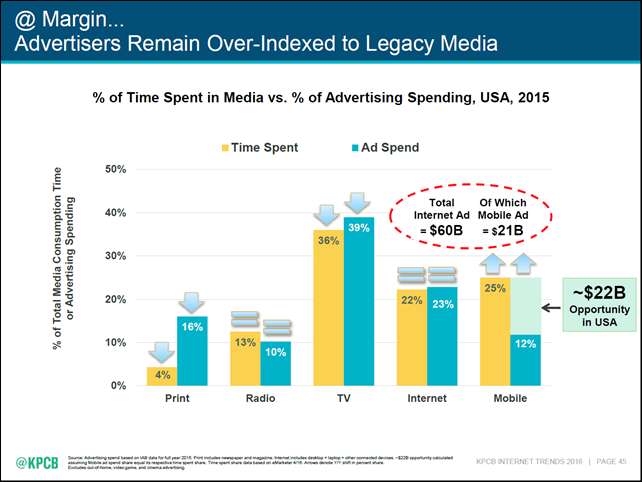 There may be opportunities in mobile space—another Nieman piece reports on a slide from Mary Meeker’s Internet Trends report, which suggests there’s still a lot of unfilled demand for ads on mobile so far—readers spend 25% of their time in mobile, but it only got 12% of total media ad dollars in 2015. On the other hand, print is still at 16% of total advertising spend for a medium where consumers spend only 4% of their time, which means print papers and magazines are going to be feeling the squeeze ever harder over the next few years as advertisers move further toward equilibrium. (Television is a little overinvested, too, but not by such a huge margin.)

But the number of mobile device users who run adblockers has risen by 90% from January 2015 to 22% of the world’s 1.9 billion smartphone users. So if news sites are going to figure out how to get their ads seen by more people out there, they’re running out of time to make them less annoying.

But the ones who are really running out of time are those who are still depending on print to stay afloat. The air is slowly but steadily bubbling out of their life vest. Small wonder you see newspaper companies doing silly things like renaming themselves “tronc” and babbling in buzzwords as they attempt to figure out some way to stay afloat. Many of them are coming to this realization too late—they should have burned their boats and gotten out of the print business years ago, but so often, by the time you realize the need to change your business so drastically it may be too late.

Yet even if they switch over in time, how to make money online when people are willing neither to pay nor to view ads is a tricky question. It may be that news providers’ last great hope is figuring out how to tame Internet advertising—both on the desktop and mobile. They need to pare it back to something people will tolerate, and do their utmost to get rid of sleazy exploiters and those who use advertising to spread malware. Until ads are both tolerable and safe, what incentive do people have not to block them?

It’s interesting to consider other aspects of that chart, though. People now spend more time on mobile than they do on any other medium except television—including the desktop Internet itself. That’s a lot of potential for mobile reading of all kinds—not just news, but e-books as well. Of course, that also includes social networking, video games, and audiovisual media. But even so, mobile ad spend continues to be undervalued, to the tune of $22 billion in opportunities. That’s a lot of people using mobile.

The outlook might not be entirely rosy, though. Morgan Stanley has reported that 85 cents of every new dollar spent in online advertising ends up in Google or Facebook’s pockets. So even if they do manage to tame their ads, there may not be that much revenue to go around unless they can also figure out how to pry more of it loose from the behemoths.