America’s Authors Guild has just shared an open letter from its current co-Vice President, novelist Richard Russo, coming out against Amazon’s offer of 100 percent ebook royalties to Hachette authors while the Amazon/Hachette dispute continues. The letter attracted a prompt response from Amazon, who wrote as follows (here courtesy of Publishers Weekly):

Our offer is sincere and it stands—Hachette need only say yes to help their authors. We also wonder what this letter would look like if Hachette had posed this idea and Amazon had rejected it. The letter conflates the long-term structure of the industry with a short-term proposal designed to take authors, the constituency this organization supposedly represents, out of the line of fire of a negotiation between large corporations. Given that the Authors Guild are an author’s advocacy group, it is hard to believe they don’t support this. They are the Authors Guild, not the Publishers Guild.

Russo’s letter, which begins “while it may be true that there are new opportunities and platforms for writers in the digital age, only the willfully blind refuse to acknowledge that authorship is imperiled on many fronts,” states that “while Amazon claims to be concerned about the fate of mid-list and debut authors, we believe their offer—the majority of which Hachette would essentially fund—is highly disingenuous.” While claiming to be “not anti-Amazon, or anti-e-book, or anti-indie-publishing,” Russo declares that “what we care about is a healthy ecosystem where all writers, both traditionally and independently published, can thrive,” stating that “we believe that such an ecosystem cannot exist while entities within it are committed to the eradication of other entities.”

First, it’s not clear what status this letter enjoys in terms of Authors Guild policy. Is it a formal statement of the Guild’s official position? Or is it simply a letter from one committed senior figure? The Wall Street Journal and other media are certainly reporting it as the official Authors Guild party line.

Then that creates a problem, because Russo himself is hardly a disinterested and objective judge. In his own work, he has been emphatically anti-ebook. TeleRead’s Paul Biba cites him delivering a talk at the GigaOm conference that was “just a tirade against Amazon and was full of misinformation.” He seems hardly the best choice for a professional body like the Authors Guild to select as their advocate and guide on this issue.

It may be true that some of our publishers are owned by corporations that, like Amazon, sell a lot more than books, but those larger corporations seem to understand that books are special, indeed integral to the culture in a way that garden tools and diapers and flat-screen TVs are not. To our knowledge, Amazon has never clearly and unequivocally stated (as traditional publishers have) that books are different and special, that they can’t be treated like the other commodities they sell.

Actually, I see little evidence from the behavior of many publishers at least that they believe “books are special.” Is the high-pressure vanity press blitz of Author Solutions supposed to be Penguin Random House’s bid to defend the writing life? Are the moves against scholarly open access by scientific publishers efforts to defend our culture?

The second part of Russo’s statement is worth even more attention, though. Amazon may or may not have gone on record to state that books are different and special, but with the self-publishing ecosystem and ebooks it has certainly done more to create new opportunities for writers than most traditional publishers have. And it’s traditional publishing terms, not Amazon, that have put authors at risk – whether or not Russo wants to acknowledge it. 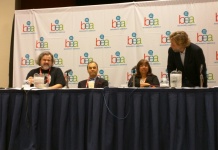