An independent children’s publisher has decided to cut ties with Amazon.

Barefoot Books has pulled its books from the online retail giant, claiming that it wants to focus on more grassroots types of campaigns, it said in a press release on Digital Book World on Tuesday.

Among the issues with Amazon that Barefoot faces is Amazon heavily discounting its books, and Amazon often selling its books before Barefoot has even received advanced copies from the printer.

“As entrepreneurs, we admire Amazon and its ground-breaking accomplishments. However, Barefoot’s commitment is to diversity and to grassroots values; to ‘small is beautiful’,” Barefoot’s co-founder and CEO Nancy Traversky said in a release. “Living Barefoot is about creating a sustainable model which enables individuals to build small-scale businesses; it’s about the vitality of intimate relationships and the power of connection. We believe our future success lies in growing our network of independent Ambassador distributors—a community where personal connections matter, where we can bring our books to life for families, and where we can stay true to the values that have defined our business since we started running Barefoot from our homes 20 years ago.” 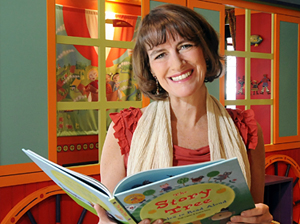 This is not the first time Barefoot has pulled out from big chains. In 2006, it took its books out of Barnes & Noble and Borders. The company says that year it actually increased sales by 40 percent.

The Studios are boutique shops, which Barefoot has in Concord, Mass.; in Oxford, UK; and inside FAO Schwartz in New York City.

Barefoot will continue to sell to independent bookstores and gift shops, and its relationships with wholesalers will not be affected, according to the release.

This seems like a bold move for the company, but one that seemingly has worked for Barefoot when it removed its books from other big chains. Barefoot seems to pride itself in having a close relationship with its customers—something companies such as Avon or Mary Kay have thrived on over the years.

I don’t see big publishers making similar moves because it likely wouldn’t benefit them, but smaller publishers—after establishing themselves in the marketplace—could look at this as a potential option down the line.