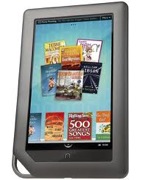 Nate Hoffelder had quite a scoop on The Digital Reader yesterday. He reports receiving official-looking material from an anonymous source indicating that Barnes & Noble will be launching three e-readers next quarter, not just two.

The three readers will include a $139 “Smart Touch” touchscreen e-ink model, and two new Nook Color tablets priced at $249 (referred to as “Encore”) and $349 (listed as “Acclaim”). Hoffelder points out that Smart Touch and Encore are the product names B&N is using for the touchscreen e-ink and 7” Nook Color models now, so “Acclaim” probably represents something new.

Hoffelder thinks that, since the Acclaim name is recognizable as the name of a defunct video game company (I well remember playing Acclaim carts on my NES) and the trademark is now owned by a subsidiary of B&N content partner Disney, that means the Acclaim is going to be gaming focused, may be the tablet device that Gamestop has announced plans to bring out, and could feature content from Disney.

On the other hand, I think it’s just as likely and possibly more so that given the price point, Acclaim might be B&N’s run at the larger, 9” or 10” tablet market—competing more directly with the iPad and the Galaxy Tab now that B&N has shown its stuff with a smaller-sized unit, not to mention getting its larger color tablet out before Amazon can produce one of its own.

Of course, it could very well be a dessert topping and a floor wax—a 9-or-10-incher that has a lot of gaming content. And indeed, for B&N to get such a tablet into Gamestop would effectively “sneak e-reading in the back door” as people buy a gaming device and then find out how good it is at reading e-books too.

I wonder, given the timing of this leak less than a week before Amazon’s big press conference, whether it might be intentional to put pressure on the company? It also makes me curious whether we might get an official announcement a day or so before the conference as B&N tries to steal Amazon’s thunder.

Keep an eye out, it could be an exciting next few days.