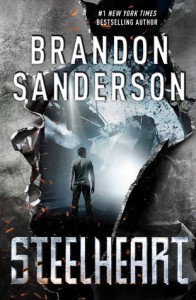 We’ve already had Joanna’s picks for 2013. Now it’s time for my best reads of 2013. Most of these I reviewed earlier this year, so please refer back to the reviews for more information about them.

A nice high fantasy book that started as self-published and then got picked up by Penguin and re-released. I read the Penguin version, and thoroughly enjoyed it. It’s an excellent example of self-pub to traditional. It’s the first book in a series. Book 2 is available for pre-order and doesn’t come out until July of next year, but don’t worry. No cliffhanger ending.

The Twelve by Justin Cronin

This is the sequel to [easyazon-link asin=”0345528174″ locale=”us”]The Passage[/easyazon-link], which I also reviewed earlier this year when I re-read it before reading The Twelve. Both are excellent non-traditional takes on the vampire story. Again, they are part of a series, and I don’t know when Book 3 comes out, but both end satisfyingly.

Tears in Rain by Rosa Montero

If you liked Blade Runner, you’ll like this one. My only disappointment is that none of her other books have been translated into English.

I’m a big fan of Sanderson, and this was the only book I gave a 5 ereader rating to this year. It deserved it. While it’s marketed as YA, it’s a great read for adults too. Like a dystopian super hero book? You’ll love this one.

I’ve read four books this year by Gilstrap, and all of them have been worth it. Nathan’s Run was his first (published) book, and it has a few awkward moments, but I loved it, especially how he got into the head of his 12 year old protagonist. Definitely check out his Jonathan Grave series too. The first one is [easyazon-link asin=”B002DYMBJE” locale=”us”]No Mercy[/easyazon-link], which I just noticed is on sale for $1.99. Get it!

I haven’t seen a bad book by Crouch yet, and this one, the second in his Wayward Pines series, kept me up way too late one night finishing it. There’s going to be a Kindle Worlds novella set in the universe coming out soon. [easyazon-link asin=”B00H26C97M” locale=”us”]Wayward Pines: Nomad[/easyazon-link] is available for pre-order. I plan to check it out later this month.

I loved every book in this series, except the last one, which I couldn’t finish. I think that means I’m done with Hearne, but the early books are a fun fantasy read. Oberon the wolfhound is a major part of the appeal, but Hearne overdid his presence in the latest book, which was part of the reason I quit.

When King is good, he’s very good. When he’s not… Fortunately, he’s good in this one. I probably should review it, but I haven’t had time. It’s a worthy sequel to [easyazon-link asin=”0307743659″ locale=”us”]The Shining[/easyazon-link], and I might even like it a bit better. It was interesting to read Doctor Sleep and re-read The Shining knowing that King is a recovering addict, which I didn’t know when I first read The Shining.

And now for a couple of non-fiction books, in case you thought all I read this year was fiction.

[easyazon-link asin=”B00BSEH9GA” locale=”us”]Asperger Love: Searching for Romance When You’re Not Wired to Connect[/easyazon-link] by Amy Harmon

I think this was my first Kindle Single. It was an interesting portrayal about love between two people with Asperger’s. I found it particularly helpful since I was writing a story at the time with a character who is on the autism spectrum.

[easyazon-link asin=”B009JU6UPG” locale=”us”]Decisive: How to Make Better Choices in Life and Work[/easyazon-link] by Chip and Dan Heath

I’ve enjoyed everything I’ve read by the Heath brothers. I’m not a big fan of self-help/motivational books, and theirs border on the “genre,” but they back up their stuff with research. Everything comes with examples, both with famous people and average folks. If you want insight into decision making (and to learn why we are do bad at it), this is a great book.