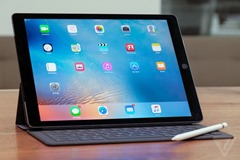 Yesterday’s new Apple event was interesting as far as it went, though there was not a whole lot of interest concerning e-books and e-readers. But that’s not to say there wasn’t anything.

Much of the event had to do with Apple’s new medical monitoring software, as well as the new green environmental options for recycling old hardware. (Let’s hear it for robot arms that can take old phones apart, hmm?)

But the two new standout hardware models could both have an impact on e-books. For starters, the iPhone SE. Although some have criticized it for being simply an iPhone 5S with a better CPU and camera, you could effectively say that about any new model of smartphone or iPhone—it’s just the same as some older one with better hardware and new cosmetic flourishes.

The important thing is that very few smartphone companies have bothered keeping up with high-end smaller phones in this era of the phablet—but plenty of consumers still think those phones are too big and want something smaller in their pocket. Apple said that 30 million people bought the two-year-old iPhone 5S in 2015, which is as many iPhones as they sold in their first two and a half years of release.

The price is fairly reasonable for an iPhone, too—$399 for the 16 GB version and $499 for the 64 GB version. (Why on earth they’re still starting their basic model with only 16 GB in this age of 12 megapixel cameras and high-definition video, I’m sure I don’t know.) It’s possible that this concentration on a flagship phone meant for people who like them smaller could help Apple regain a foothold in the global mid-priced smartphone market—which is currently Android’s playground.

And the phone has a 4” 1136 x 640 326 ppi retina display, which will make e-book text look sharp and clear, albeit small. It might be small, but almost any smartphone screen is small—and small screens haven’t yet dampened the enthusiasm of people who enjoy reading on them. For that matter, Steve Jobs himself is on record as having felt that smaller was better when it came to smartphones.

But for iPads, larger screens are the order of the day. For all that a lot of people seem to like the small iPad Mini, two thirds of all iPads sold remain the larger 9.7” iPad Pro size. So, Apple’s release of a new model in that line is not exactly surprising.

Again, much of what Apple had to say today about the iPad didn’t have much to do with e-books, but one new feature it did mention seems like a potentially important innovation when it comes to e-reading. That feature is “True Tone,” the ambient light color temperature matching system.

The interesting thing about this is that it lets the iPad explicitly mimic the affect of paper—or, for that matter, e-ink readers—which also changes tone with the environment because it works by reflected rather than self-emitted light.

It’s possible that this could help reduce eyestrain and headaches associated with reading from a light-emitting tablet—or, for that matter, a smartphone, when the same technology eventually makes its way to iPhones. Either way, this is one of the best displays ever seen on a tablet, and it’s aimed right square at e-readers.

That said, the price on this new iPad starts at $799 for WiFi only and 32 GB of memory, and goes up from there—so e-book readers on a budget will probably be waiting a while to see the benefits of that new technology. But that’s just how it goes with Apple.

At any rate, there might have been relatively few things for e-readers in yesterday’s Apple presentation, but at least the ones they did have were pretty big in the end.