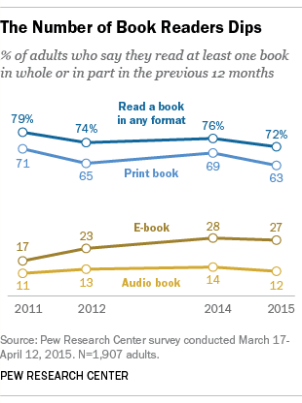 Never mind that books read for fun must compete against Netflix miniseries and video games and goodness knows what else.

The Big Five Publishers have been gung-ho on jacking up e-book prices to get more booklovers to buy paper books supported by the publishers’ antique infrastructure.

But what if both unit sales and revenue shrink for the book business as a whole, because e-books are the future and the megapublishers’ counterinsurgency efforts against them are horribly off target?

What if instead they should war against rival entertainment media? No napalm or flame-throwers. Just better marketing and intelligent pricing.

Pesky questions like the above come to mind in the wake of a new Pew Research Center poll showing that only 72 percent of U.S. adults read books in the 12 months prior to March-April 2015. By contrast, the 2014 equivalent was 76 percent and the 2011 one was 79 percent. Oops. Seven percent in the wrong direction from 2011 to 2015, despite an upward bump along the way.

Now, consider the decline in reading of e-books (28 vs. 27 percent, just a one percent drop in the 2014-2015 comparison) vs. the decline in the reading of p-books (69 vs. 63 percent, a whopping six percent difference). Without E and audiobooks (14 percent vs. 12 percent for audiobooks), the all-format decline of four percent from 76 percent to 72 percent would have been bigger.

But who cares? We need to protect those paper books and warehouses, right? Let’s burn down the book village to save it. To hell with E. (Sarcasm mode.)

Young people as innocent civilians in the E vs. P war

Also noteworthy is that 34 percent of Americans adults 18-29 read e-books and 69 percent read paper books and 80 percent read books in any format. Thirty-four percent is nothing to sneer at. By contrast, only 23 percent of the 50-64-year olds read e-books. So much for the media myth saying that the young are shunning E compared to their elders. They’re reading both E and P.

Mind you, it still isn’t as if typical young people are that much into e- or p-books as a routine in the first place.  The Bureau of Labor Statistics reports the average 15-19-year old spends only six minutes a day reading for fun. To read “at least one book a year in whole or in part” is hardly enough by itself to qualify as a bookaholic. As Pew has shown, a big different can exist between mean and median numbers of books read within the respective age groups and others. Eager book readers within the 18-29 group drive up the average. Mean is 11 books read in the most recent reporting period; median, just 4.

On top of that, remember that the typical American household spends less than $120 per year on all kinds of nontextbook reading, according to the bureau. When the Big Five raise prices, they make it harder for books to compete against other entertainment, regardless of the age of the readers—as noted earlier. No, I won’t beat up on Netflix and the others. Unfair. Netflix simply employs more adept marketers and price setters than the Big Five publishers do.

So what conclusions have we? If Big Five Publishers want to expand rather than shrivel up book sales, they need to roll back e-book prices of major titles to the  $10 or so common in the pre-agency agreement era. Otherwise they will accelerate the total shrinkage of readership, especially among the cost-conscious young who rely more than other age groups on affordable e-books.

Yes, I know: the Big Five want to look out for bookstores displaying their titles (not just try to keep justifying the warehouses they may own or lease). I myself hope physical stores will survive. What’s more, the Big Five’s favoritism of them would be wonderful from a shareholder perspective if it worked without harming total book sales. It won’t. Beyond that, how essential are physical stores compared to the past? Exhibit A is the decline of Tower Records. The music industry somehow survived. In ways ranging from Amazon to blogs to, yes, public libraries, American can still discover books just as millions have discovered music without Tower and brethren. OverDrive’s library business is flourishing.

But wait. I haven’t even addressed the digital divide angle in income terms. A mere 15 percent of adults earning less than $30K per year read e-books during the latest surveyed period, compared to 33 percent of those from $50K to $75K and 46 percent above $75K. Hello, Associated Press? Isn’t it time to look beyond gadget counts in determining whether there’s a digital divide? Doesn’t a difference exist between using a tablet to watch sports and using it to read e-books? Needless to say, higher e-book prices just widen the divide. As a lifelong progressive Democrat, I’d love for supposedly liberal New York publishers to be more sensitive to social concerns, especially since it would help their bottom lines and the earnings of their writers.

Detail: No, the latest rounds of agency agreements facilitating e-book price gouges are not the biggest explanation of the reading decline—they didn’t blight the e-book business soon enough even though S&S signed last October and other big publishers followed at Amazon. But I’m looking ahead to the future damage they will do.