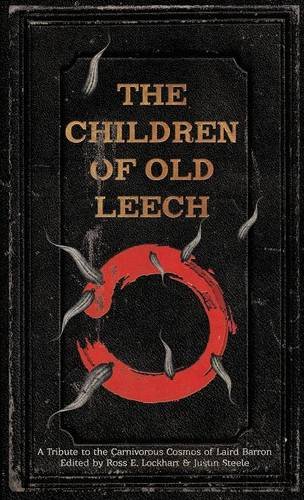 This is both a superb collection of dark tales and a testament to the highly developed, involved, and even self-referential status of the new new wave of American horror and weird fiction. For it is a tribute anthology from some of the best writers in the field in honor of one of their most esteemed peers, Laird Barron, who is still very much alive and barely into his fourth volume. The Children of Old Leech: A Tribute to the Carnivorous Cosmos of Laird Barron might stand in grave danger of being an incestuous lovefest. Is it? Anything but.

Who is the man who inspires this kind of veneration, then. As Ross E. Lockhart writes in his afterword, Barron, is renowned for “fusing the strangeness of supernatural horror with the stark naturalism of Jack London,” building “a high-stakes carnivorous cosmos populated with tough, rugged protagonists more accustomed to inhabiting hard-boiled tales of crime or espionage.” For a Brit like me, that might set alarm bells ringing about macho posturing, if it weren’t for the fact that: a) Barron’s Alaskan background has endowed him with more than enough real-life credentials to face down any self-regarding proponent of modern American manhood, and b) he is a cultured and dedicated wordsmith, with a great love of the craft. And those writerly values seem to have communicated themselves to his friends and followers.

One proof is the sheer quality of some of the contributions. Any collection that includes stories by Molly Tanzer, Jeffrey Thomas, T.E. Grau, Richard Gavin, Paul Tremblay, Joseph S. Pulver, Sr., John Langan, Cody Goodfellow, and Scott Nicolay, is almost bound to have something worthwhile in it: As it is, some of these names were clearly inspired by Barron’s example to write at or near the top of their game. Langan, for example, is a writer whose published oeuvre has a reputation only matched by its slenderness, and every new story is greeted almost with adulation. Good to report, then, that his “Ymir,” for his real-life buddy Barron, bears the hallmarks of some of his best work.

Another strength of the volume is its variety. Yes, there are plenty of nods among the 17 stories here to both the Pacific Northwest locations Barron favors, and some of his favorite tropes and symbols: The broken circle, the mysterious things dwelling in the heartwood of trees, etc. But rarely do these overwhelm the individual imagination of the contributors. I’m skeptical as to whether Barron has really bound all his work together, as Lockhart claims, into “a Pacific Northwest Mythos reminiscent of … Lovecraft’s witch-haunted New England,” purely because his writing is so diverse. Offshoots of it can accommodate settings and styles as diverse as Orrin Grey’s decadent Europe in “Walpurgisnacht,” Molly Tanzer’s squabbling academia in “Good Lord, Show Me The Way,” Joe Pulver’s vengeful Holocaust survivors in “The Last Crossroads on a Calendar of Yesterdays,” and Cody Goodfellow’s bizarre cyberpunk gladiator games in “Of a Thousand Cuts.” A reader new to the whole Barron cosmos won’t feel excluded at all, though familiarity with those totems obviously will help. What they will feel is entertained, shocked, stimulated, rewarded, upset, disturbed, and sometimes very scared.

Could the new wave of American horror and dark fiction be sucked into a downward spiral of writers writing for, to, and about other writers? Well, on the strength of this collection, if that does happen, it promises to be a white-knuckle ride.