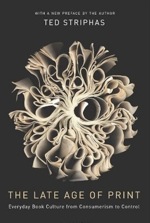 I’m on the road right now, so unfortunately I don’t have time to compose a blog post of the usual length. But since I promised last week that there’d be new content here, now, I figured it would be worth sharing a few thoughts about something that’s been on my mind lately. I’m talking about Barnes & Noble, the beleaguered bookstore chain that was, until recently, practically synonymous with bookselling in the United States.

Specifically, I’ve been thinking a lot about the books you see immediately upon entering any Barnes & Noble bookstore — the ones featured in the displays right in front of the doors. This probably isn’t news to you, but in case you’re not aware, those books appear there not because they’re particularly noteworthy. Instead, publishers have paid a hefty fee for them to appear there, under the assumption that they’ll immediately grab the attention of customers as venture in. This isn’t a secret. The phenomenon has been well documented, most notably by Laura Miller in her wonderful book Reluctant Capitalists: Bookselling and the Culture of Consumption.

It sounds like a winning proposition, right, at least for Barnes & Noble? Here’s a way to monetize valuable floor space, over and above whatever revenue the sale of the books themselves may ultimately produce. In fact it may not be so simple.

A friend of mine — someone who’s in the know — recently told me something interesting about how Wal-Mart introduces new products into its stores. As with Barnes & Noble, manufacturers pay hefty fees to Wal-Mart to have their products introduced into in those stores. But there’s a difference. When Wal-Mart places a new product on the shelf, it’s often not a guaranteed spot; it’s more like an audition. Someone with the company monitors the sales of not only that particular product, but also those of the products on display nearby. If the new product sells well and its neighbors continue to do well, or even better, then great — the product is in. If sales of the neighboring products fall after the introduction of the new one, however, then the new one is likely to be moved; if it continues to hurt sales net sales, then it’s likely to get dropped by Wal-Mart altogether.

In other words, Wal-Mart doesn’t only encourage paid product placement in its stores. Rather, it looks at the affect of new products on sales of all of the surrounding products. The goal, of course, is to maximize payment plus sales.

Now, I don’t know if this is the case for sure, but my understanding is that Barnes & Noble does not take as holistic an approach. If you’re a legitimate publisher and you’re willing to pay to play, then, I believe, you’re in with B&N. But wouldn’t it be interesting to see what would happen if Barnes & Noble took more of a Wal-Martesque approach to monitoring the effect of these pay-to-play books on sales overall? Could it be that these promotions help the sale of featured books but diminish possible net sales overall?

Only Barnes & Noble can know the answer to that question, of course, but in any case it’s an interesting one. And it’s the difference between thinking about bookstores as places that sell particular books as opposed to retail ecosystems, or places where the sale of one product affects the sale of every other, however minutely.

(Via THE LATE AGE OF PRINT.)