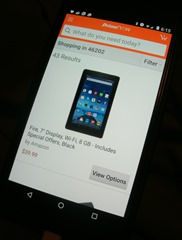 I just noticed something I didn’t expect, but honestly I probably should have.

I was noodling around with Amazon Prime Now, and happened to notice that it lists the same sale prices on Amazon devices as given in Amazon’s Valentine’s Day sale. The $40 Fire tablet, the $100 Paperwhite, and so on.

Probably not a surprise to anyone who orders from the service all that much, and it makes sense—just as Amazon sells things at the same online prices in its bookstore, it stands to reason it would sell them at the same price for local same-day delivery. It’s not going to be undersold by itself. Best of all, there’s no delivery charge unless you need it immediately. If you’re willing to wait a few hours, they’ll bring it by at no charge (apart from a delivery driver tip).

Of course, the vast majority of the country isn’t in an Amazon Prime Now delivery area yet—but it’s in at least twenty cities now and still expanding, whereas there’s just the one Amazon Books so far. And those urban areas that do have Prime Now can effectively take advantage of Amazon sale prices on some of its most popular items and get them within just a few hours, not a couple of days. Heck, even the delivery driver tip wouldn’t be that much more than the $2.99 extra shipping cost to get something within one day instead of two from regular Prime. Sure, you can’t get anything from Prime Now that you could get from Amazon itself—but then again, Amazon’s bookstore only carries a small subset of Amazon’s greater selection, too.

Is it any wonder that local competitors are starting to lose their cool over the specter of Amazon’s bookstore? The surprising thing is that they don’t seem to be expressing the same concern over Amazon Prime Now, when it’s possible that could be an even greater threat. With Prime Now, you don’t even have to go to the store—instead, the store comes right to you, the same day you place the order. And Amazon doesn’t need to go to the trouble of setting up a new store for it, like it did in Seattle—it can use its existing warehouse facilities, which it already has all over the place to cut down on regional shipping times.

Bookstores might not be too worried as yet because Prime Now doesn’t have that many books—the Indianapolis Prime Now has just over 500 titles available. But they’re five hundred of the most popular titles, that’s already a tenth as many as you could find in Amazon’s physical bookstore in Seattle, and nothing stops them from adding more—the titles are there in Amazon’s warehouse, and they don’t need to take up valuable real-estate on a store shelf. Plus, Prime Now can carry all sorts of different things—foods, cleaning supplies, household goods, and so on—that even an Amazon bookstore couldn’t stock. And when Amazon runs a sale, Prime Now is running that same sale as well.

What’s better than a $40 Fire tablet? A $40 Fire Tablet you can have the same day you order it—without even having to leave your home. Maybe that should worry local bookstore owners even more than the potential for more Amazon retail space.