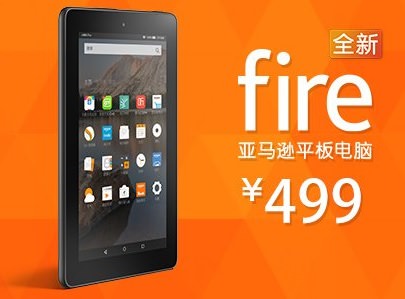 Amazon has just announced the debut of its cheap Fire 7-inch tablet in China – apparently with a strong educational angle. According to Amazon:

Fire, its fastest-selling tablet ever, is now available to customers in China for just RMB 499 Yuan [$70]. With access to hundreds of thousands of Kindle books and with English language learning features like Word Wise, Fire is an easy and affordable option for customers who want to read or learn English. Amazon China also today announced an agreement with Baidu, a leading internet services company, to provide a search, apps, and online video experience on Amazon tablets in China.

Baidu, as it happens, is one of China’s most successful internet services companies, and is closest to Google in its business model. It’s a natural partner for Amazon in the Chinese marketplace – and also, alas, noted for its pro-active compliance with the PRC’s online censorship regime. The media offerings served up through the new China Fire, then, will likely be fully China-censorship-compliant.

Amazon has had a Chinese presence since its acquisition of the Joyo.com online shopping platform, now Amazon China, in 2004. As you can see from the screen grab above, the Fire is already on offer at Amazon.cn. Neil Lindsay, Vice President at Amazon Devices, added in the announcement: “We’ve already sold millions of Fire tablets since launch, and we’re excited to now make it available to customers in China.

“With millions of readers already using Kindle e-readers in China, we’re excited to now offer another incredibly affordable option, particularly for customers learning to read English. With tools and features like Word Wise and Blue Shade, plus a large selection of Chinese and English content, we think readers will love the new Fire tablet.”

There isn’t much likelihood of Amazon becoming an apostle of free speech and free expression in China. With Google already making its first tentative steps back into the PRC, Amazon is not likely to be any better. However, it will probably manage to sell an awful lot more Fires.