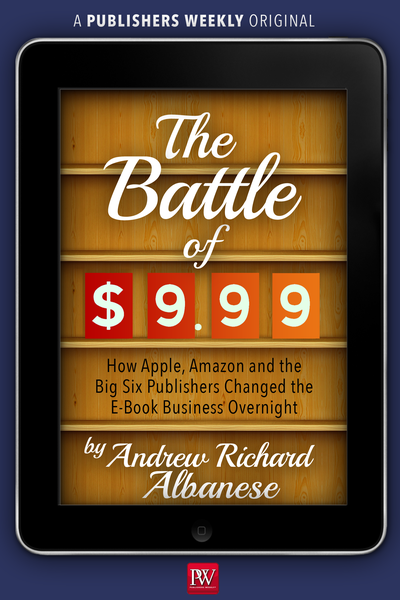 You might remember my review of the Publishers Weekly Kindle Single e-book The Battle of $9.99 a couple of weeks back. The book summarized all the evidence and testimony that had been presented in the Apple e-books trial in a way that was cogent and easy to understand.

Today I got word from Publishers Weekly that author Andrew Albanese has gone back and rewritten the end of the book to take into account the recent decision in the case and to ponder what it means for the future of e-books. The revised edition hits e-book stores tomorrow, and will be available to anyone who has already purchased the original version.

I’ve read a preview of the new section, and it is every bit as clear and insightful as the rest of the earlier edition. Albanese presents the arguments and position of both sides evenly, and explains why the judge ruled as she did in greater depth than most coverage of the case. And he notes that, while Apple lost the case, and its iBooks store entirely failed to set the world on fire the way Apple had expected when it launched, nonetheless in some ways the publishers’ plan worked. Publishing did move to the agency model—and, because the agency model is legal in the absence of publishers cooperating to impose it, it is likely they will return to it when the sanctions end.

Thus, sometime in 2014, the sanctions will end for publishers, and eventually, the agreed upon ebook credits will be paid out to consumers. At that point, the agency-era e-book market will get something of a do-over. Where competition takes the industry then, remains to be seen. But suffice it to say that Amazon’s pricing was only one challenge facing publishers, as well as consumers, as we transition to digital reading. And bigger battles may still loom.

Battles such as the fact that e-books are licensed rather than sold, and libraries are increasingly unable to make use of them the same way they could with print books. There are a host of technical and privacy issues that could cause trouble well into the foreseeable future. And so on. It’s well worth reading; I highly recommend it.

But it’s also worth noting that it’s this book’s very electronic nature that means it can be updated and refreshed to reflect recent events. If this book had been printed and bound, like so many quick-to-market news coverage books we’ve seen in the past over events like the O.J. Simpson trial, 9/11, and so on, it would already be out of date. But since it’s an e-book, Albanese could simply go back in and revise it, and push the new version out the door.

I wonder if we’ll see more in-depth news coverage taking this route in the future: a one-time fee to buy the book, then several updates as time goes by and more things happen? Regardless, The Battle of $9.99 is a great way for anyone who hadn’t been following the case to get a start-to-finish understanding of the conspiracy’s roots, rise, fall, and trial in one convenient package. Highly recommended all the more for the update. Remember, it doesn’t go live until tomorrow!