If you love water—the beach or swimming pools, or maybe just the bathtub—the $130 Nook GlowLight Plus might be for you. Same if you’ve a steady buyer of books from  Barnes & Noble. Otherwise avoid.

The Nook I tried yesterday at B&N’s Potomac Yards store in Alexandria, VA, just didn’t stand out except for the waterproofing (not tested but presumably there).

Perhaps a just-released software update will fix this problem and others, but I found the page turns to be slow compared to my 2013 Kindle Paperwhite’s.

A Fact Sheet—hello, B&N, why didn’t you make this widely available from the start?—includes more detailed specs for the GlowLight Plus than did the original news release. Like the release, It brags about the aluminum body, and in fact the bronze-colored aluminum in back looks great. The negative is that some of the edges are on the sharp side.

One positive is that B&N give you 2.8GB of accessible storage, which could come in handy, since this device lacks a card slot.

Alas, in real life, the Nook GlowLight Plus lacks sufficient perceived-contrast for me, at least. If B&N had offered an all bold-text bolding option, one of the many typographic possibilities in the $180 water-resistant Kobo Aura H2O, I might be better disposed.

Still a slow learner, B&N has stuck to just a handful of font styles even though this would be at least one obvious way to catch up with Kobo and differentiate itself from Amazon.

I’m going to ask the company if it will at least consider a software update with an all-bold toggle. It would be good business as well as good PR. E-reader buyers tend to be older than those of phones, and an all-bold option would appeal to many customers with aging eyes. Perhaps B&N could use this as a hook to market through AARP. Also, more accessibility would make the readers more attractive to schools and libraries.

Text to speech—probably still possible even with a waterproof case—would likewise have helped B&N differentiate itself from Amazon.

Not surprisingly,  I didn’t exactly see a crowd milling around the GlowLight Pluses on displays, and no sales person approached me. Admittedly that was during a weekday. I wonder about the weekends, too, however.

Thinking more broadly, I really would like Amazon to get more competition, especially from Nooks and other ePub-capable readers. I’ve said that before. I mean it!

While at Potomac, I tried out B&N’s non-E Ink offerings and found them as a whole to be stronger than the GlowLight Plus.

At $150, knocked down from the previous $200, The Samsung Galaxy Tab 4 Nook 7.0 cost the same yesterday as the equivalent at Best Buy. The seven inch screen, 1280 by 800 pixels or 216 pixels per inch, offrs far more perceived-contrast than the Nook does. Too bad the typographical options within the Nook app are still limited. But at least the page turns are instantaneous. I realize that some people find E Ink to be less of an eye strain than LCDs, but they might want to experiment more with different color combinations, and the Nook app provides some brownish-pink backgrounds as well as a white-against black combination.

Similarly I was impressed by the eight-inch Samsung Galaxy Tab 2 Nook, with a a vivid AMOLED screen. Sure enough, the $400 price tag was the same as at Best Buy, which, by the way, is in the same shopping complex.

A lesson here? If B&N can’t improve the reading experience on its Nook E Ink machines, perhaps it should partner up Samsung on an e-paper model as opposed to apparently relying on Netronix.

For now, B&N, please stop bragging about your high-contrast E Ink screens. Ain’t so yet compared to LCDs, and I’m not blaming you alone. Perhaps the next release of E Ink can do better.

Detail: B&N members can save ten percent on purchases of the GlowLight Plus and other devices and also receive $50 in Bonus Coupons. Cost is $25 a year. That makes membership a no brainer when buying the most expensive B&N devices.

Related: Our earlier item on the GlowLight Plus, as well as Nate’s take. 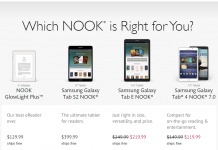 Is the Nook GlowLight Plus enough e-reader for Barnes & Noble?