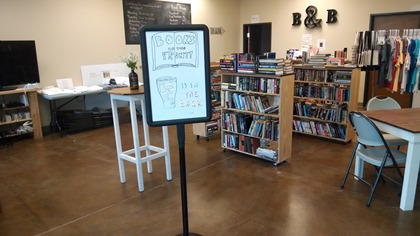 Remember UK bookshops’ plans for a “Civilised Saturday” to follow Black Friday last year, in which one bookshop owner discussed how they would have a pleasant afternoon “handing out prosecco” as well as cakes and coffee? At the time, I said “That’s a tradition I could get behind, though in a lot of places west of the Atlantic that would require a liquor license.”

Well, It’s been in the news lately that Barnes & Noble has applied for a liquor license for its Utica, New York store—or at least a beer-and-wine license. Nate covered it early on at the Digital Reader. It wasn’t clear exactly what purpose the license would serve, but attorney Kevin Danow who consulted with B&N on the application suggested it might be used for serving beer and wine at events such as book signings or readings. He said that it certainly wouldn’t turn the location into a nightclub.

On Book Riot, Constance Augusta Zaber suggests that a bookstore/nightclub combination would actually be a pretty good idea. She starts off by suggesting that book people are the most fun sort of people to drink (and get drunk) with, and that a bookstore night club could have the best literary theme nights. And then there’s the introvert benefit:

This would also be the best bar to read and drink at. As someone who enjoys being around people but not actually being social I’m a big fan of reading at bars but without fail someone ends up interrupting me to ask what I’m reading. It’s bad enough when they then try to start a conversation about my book but worse is when they take pity on me for not having friends and try to invite me over to join their friend group. Just imagine a bar where you could sit and read and eat bar nuts and enjoy the scene without some well-intentioned person coming over to interrupt your good time. Doesn’t that sound freaking great? 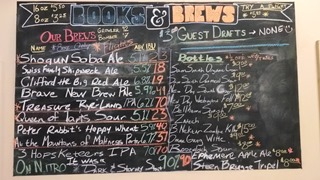 The only problem she sees is that book nerds might have cause to regret it the next morning when they discover how much money they parted with on books while inebriated. I suspect that Zaber’s tongue might not entirely be absent from her cheek for all of it, but it’s certainly an interesting idea.

It’s also an idea that’s been done, to a certain extent, in a number of places where beer and books are popular. In particular, I’m thinking of a place here in Indianapolis called Books & Brews. I actually have to thank Nate for that, too, as it was from him that I first even heard about the place. It’s a nice little brewpub that makes very good beer and has a fair selection of sandwiches, too. The bookstore side could have used a little work, the last time I looked in—the shelves weren’t really in any sort of order, and I kind of got the sense the bookstore part was largely just there to give them an excuse to indulge themselves in literary puns for their beer and menu item names. 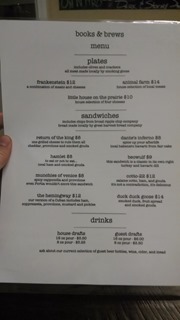 That said, it’s a fun place to hang out, and there’s no lack of something to read while you drink. If all the books were in a jumble, well, at least there was always the chance of finding something interesting completely by surprise.

And in serving beer and wine for at least some events, Barnes & Noble would effectively be coming at the idea from the opposite direction—instead of a brewpub that adds books, it would be a bookstore that adds wine and beer. It could certainly help people relax. And it would certainly bring something customers couldn’t get just by ordering online from Amazon.

Is Barnes & Noble flailing in desperation for something to help it compete with Amazon? Or is it testing the waters on something that would let it be more like British bookshops, which have that classy old-world cachet that puts people in mind of Edwardian times and Agatha Christie? And more importantly, might it work?

Certainly, Books & Brews seems to be doing well enough. I haven’t heard any hints that it might have to close down. But then, there are literally dozens of microbreweries and brewpubs in the Indianapolis area, and they all seem more than capable of staying in business because this is a town that simply loves good beer. And the nice thing about books is that they’re a relatively low-maintenance thing to sell—they don’t ever expire or go bad; they just sit there unobtrusively when you’re not doing anything with them. So they could simply sit there and serve as a side attraction for people who mainly come there for the beer. 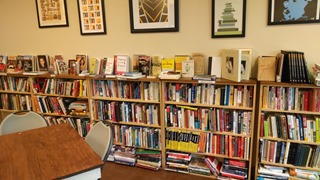 I’d like to think the staff would be able to turn people onto good books, possibly over a beer or two, but how can you even tell someone what to get if you don’t know where it is on the shelves? It’s possible I’m being a little unfair, but then, I do like a good bookstore, and it was a bit of a disappointment to find the books in that place hadn’t even been sorted.

Still, it’s been a while since I’ve been in there. (And an even longer while since I took these photos—September 2014—but they were the only ones I had to hand, and the place is halfway across the city and it’s freezing right now.) I should go up there again at some point and see what it looks like now.

It might well be that if Barnes & Nobles were able to start serving beers and wines in addition to coffee, they could be something worth visiting. For all that Amazon has been outcompeting them, they are reasonably decent bookstores (or at least they were—the “book” portion of the stores has been dwindling lately), and well-organized too. If you could get a decent beer there and have a look around well-organized shelves, that would be a perfect combination.