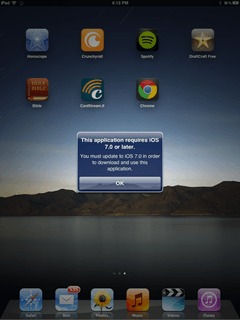 It’s tempting to scan that question to the sea chanty “What can you do with a drunken sailor?” When you get right down to it, a first-gen iPad is just about as useful as a drunken sailor.

I actually happen to have a first-gen iPad myself—sent to me in April, 2010, by NAPCO, shortly after they bought TeleRead. I’m just a couple weeks away from my six-year anniversary with the device, in fact.

Though I haven’t used the tablet regularly in a while, Nate Hoffelder reminded me of it the other day. He called my attention to a Washington Post story on the problems the government’s new Open eBooks program is running into in poorer school districts:

When librarian Jennifer Nelson arrives at the tiny library at Crewe Primary School each morning, she is confronted with a cart of first-generation iPads. The detritus of attempts to infuse technology into one of the poorest and most rural schools in Virginia, the tablets are hopelessly obsolete, worth little more than the cart on which they reside.

Is it really as bad as all that? I dug up my old iPad, plugged it in, and took another look.

By today’s standards, the first-generation iPad seems ridiculously clunky. That big old brushed-aluminum case is pretty heavy by comparison to the models that came after, but at the time there wasn’t anything like it to compare it to. 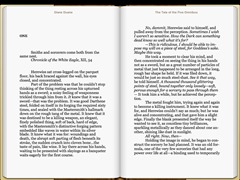 It’s funny to consider in this era of cheap and plentiful Android tablets, but at the time this iPad came out, there wasn’t anything else in its league. Tablet-makers had tried for years to cram Windows, Linux, or whatever else they could fit into a tablet form factor, but the iPad was the first ever tablet that was actually any good. It was also the impetus for Apple and the Agency Five publishers to illegally impose agency pricing on Amazon—and, Steve Jobs expected, the key to a new Apple-driven domination of the e-book market.

I will admit, iBooks was one of the best EPUB readers I had ever used at the time, and it’s still pretty darned good by my lights. But Apple never did anything more with e-books than put a store of its own out there for iOS devices. It never pressed its advantage, nor did it even try to expand to other platforms. By now, in the aftermath of the Supreme Court declining to hear Apple’s appeal, the idea of Apple dominating the e-book market with this expensive tablet seems ridiculously quaint. 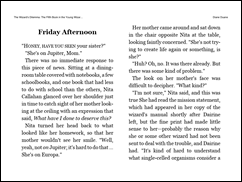 Six years on, the iPad still works. It has a decent display (though nothing on the order of Apple’s later Retina models) and it can still run apps and show videos. The fundamental problem with it is Apple’s usual planned obsolescence. The first-generation iPad never got any version of iOS later than iOS 6, whereas Apple’s current devices are up to iOS 9.

As I understand it, the iOS app development process is not built with backward compatibility in mind. Apple requires new apps to be submitted using the latest version of the iOS software development kit, which will only make apps compatible with current versions of iOS.

However, Apple did come out with a feature that lets devices running iOS 4 or later download the most recent compatible version of a given app. So, my first-gen iPad isn’t necessarily as useful as a more recent tablet, but it’s not entirely useless. It’s got a sort of zombie-like undead quality to it. 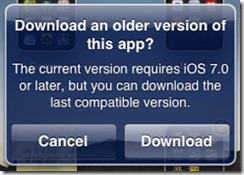 The apps seem to work all right, for the most part. The Facebook app doesn’t have Facebook’s new emoticon reaction feature, but it still displays current Facebook posts just fine apart from that. 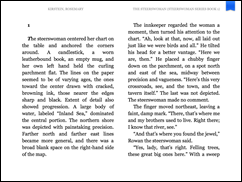 As for e-readers, I tested both Kindle and Nook, downloading e-books from my online libraries. The Kindle app doesn’t have the Bookerly font, but Georgia looks just fine and is perfectly readable. It doesn’t have X-Ray, either, but then, what do you really need that for anyway if you’re just interested in reading? 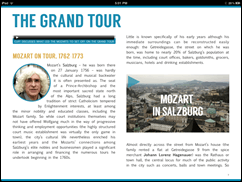 I checked out iBooks, too. It still reads sideloaded EPUBs as well as ever, and it will even download some of the fancy multimedia e-books from the iBooks store—the Beatles Yellow Submarine book, or that Mozart e-book I mentioned in December.

But that only goes so far. For apps that don’t have versions that old, such as Google Hangouts—or, apropos of that Washington post article, Open eBooks—you’re effectively out of luck. Likewise, if the cloud backend for the old app has changed enough that the old app no longer talks to the online version of the new app, you’re out of luck.

As far as I know there’s no way any new apps could be developed for an older version of iOS—as I already mentioned, they have to be developed using the latest SDK, which isn’t backward compatible. Hence, there will never be a version of Open eBooks that runs on iOS 6, so librarian Jennifer Nelson is out of luck in that respect.

But with as many older e-reading apps as still do work with it, she could find other uses for them. iBooks could still open EPUBs from Project Gutenberg, the Baen Free Library, or other free sources. The web browser could still access cloud-based resources like Wikipedia. They aren’t completely useless; they’d be a lot better than nothing, used properly.

And one aspect of the digital divide that Washington Post article didn’t mention is that, thanks to Android, there are now a lot of cheap device options for Open eBooks out there. As I mentioned earlier this month:

Speaking of cheap hardware, the Open eBooks app will absolutely install and run on both my $10 LG Sunrise Tracfone (no longer available for $10, unfortunately, though the Straight Talk variant of it is currently $20 on Walmart.com) and the $40 RCA Voyager II tablet. The Open eBooks app isn’t available on the Amazon Fire store, but I just checked my $50 Fire that I’d patched to include the Google Play store and it didn’t object to installing the app either. Of course, I can’t get any use out of the app without an access code, but it’s gratifying to know it would run on one of these cheap devices for kids who had one.

Open eBooks will run on devices that cost a tenth or even a fiftieth as much as a new iPad. They may not be very fancy or look very great, but they’ll absolutely work. Perhaps these low-income schools should look into ways of obtaining some inexpensive tablets and phones for such a use. They could apply for grants, run fund drives, ask for donations, and so on. Even a small amount of money would be sufficient to obtain a good number of cheap devices.