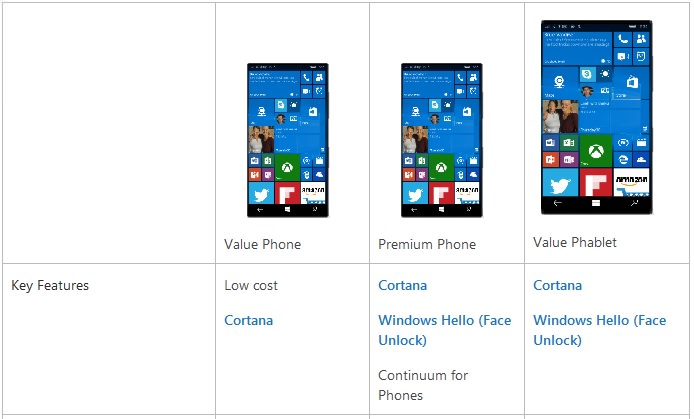 One of the most interesting features of Windows 10 Mobile, as some readers will be aware from my previous post, is Microsoft’s bid to bring the mobile experience as close as possible to the desktop, via the Continuum for Phones functionality, which essentially can transform some models of Windows Phones into mobile desktops when connected to external monitors and keyboards, and the Windows 10 Universal apps initiative, which aims to deliver apps that can run across all Windows 10 machines, whether PCs or mobiles. This in principle should bring Windows 10 close to that dream scenario where a single device can be your phone on the move or your computer at your desk, and where you don’t have to compromise at all on app functionality when you use a mobile device.

Not all Windows 10 Mobile phones will be equal, however, in this new ecosystem, and Microsoft has released a chart on form factors and recommended hardware configurations that its manufacturer partners are going to follow. The bottom end configuration, or “Value Phone,” with a 3.5-5 inch screen, will conspicuously not support Continuum for Phones. It’s also unclear whether the so-called “Value Phablet” configuration will either, although it obviously would make more sense for such a device to run Continuum. In its tablet form factor list, Microsoft already includes Continuum for Phones for the lowest-cost 7-inch tablets, and presumably on the larger ones as well, although it’s not mentioned in their specs. And note that Continuum for Phones is not yet available on current devices, but is still in the offing.

There’s a lot of debate at the moment surrounding some supposed pending flagship Windows 10 Mobile devices, apparently codenamed Talkman and Cityman. It appears that these two devices are going to be the first to actually implement Continuum. However, they’re also being flagged as medium-to-high end.

So if you want Universal apps on a Windows 10 Mobile device, you should be pretty much in luck no matter what you choose. But if you want that extra Continuum for Phones functionality when you pick up one of the next generation of Windows Phones, choose wisely, and take a very careful look at what’s on offer at the cheaper end of the market -and what is missing.

Related: The Freda and Book Bazaar Reader apps (which we have not tested yet in a Windows 10 mobile/desktop context). Also see E-books on your Windows phone: Try free Freda app—offering text to speech and easy downloads of free books.