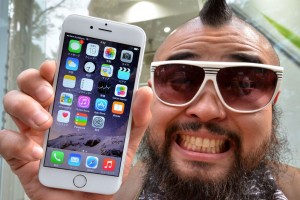 It seems like this ought to be an April Fool’s Day joke, but I’m only doing one of those this year. If you’re looking for more room on your iPhone to hold all your e-books, Gizmodo reports that Redditors have found you can force iOS to clear some space for you by trying to rent a movie from iTunes that you don’t have enough space to download. Gizmodo columnist Bryan Menegus writes:

I loaded my beat up iPhone 5 with music until it was bursting at the gills and then attempted to rent Peter Jackson’s 6.83 gigabyte masterpiece [The Lord of the Rings: The Two Towers]. Lo and behold, I had gained almost 200 megs out of nowhere. Three more rentals and my overstuffed phone had gone from a meager 381 megs to a full 1.2 gigs of free space.

You won’t be charged for the rental as long as you don’t actually have enough space to download the movie (remember, try to rent it from your phone, not from iTunes on your PC!), but it does seem to clear out a decent chunk of space each time. It’s not clear what it actually does get rid of, or why it gets rid of a little more each time you do it repeatedly. The best guess of the people in the Reddit thread is that it forces a manual clean-up of unnecessary cache files.