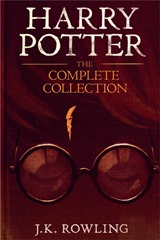 Update: If you didn’t already grab it, looks like it’s too late now. The price has gone back up to the same $56.64 that everywhere else is charging.

Speaking of Harry Potter, a friend just called my attention to this great deal in the US Kindle store. Amazon has a single-e-book edition of all seven Harry Potter novels, Harry Potter: The Complete Collection, currently listed at $14.99. That’s almost 75% off the $56.64 Pottermore is charging for the e-book collection on its own site or Google Play.

I don’t have any way of knowing how long this price is going to last—the price listing says it was set by the publisher, Pottermore, so Pottermore could change its mind at any time. But if you haven’t ever gotten around to buying Harry Potter electronically, or you’d like to have it in a 10-megabyte single-volume edition, $2.14 per book is not at all a bad price to pay for the series.

I can’t readily tell whether this edition has DRM on it—there’s no listing for “simultaneous device usage,” which is normally what you look for to be able to tell. Pottermore usually leaves DRM off on its own editions, but I don’t know what it does for e-books sold via Amazon. However, even if it does have DRM, it’s still an incredible bargain at that price.