“With the departure of its respected managing editor, how many professional journalists are still left at Consumer Reports? Virtually all of the major editors who produced the iconic magazine, as well as some of its best and most experienced reporters, have left CR in the past couple of years. (Disclosure: I am one of the editors who chose to leave.)” – Jeff Fox, via AlterNet

The TeleRead Take: Oh, no, say it ain’t so. Didn’t our parents tells us never to buy a car or a refrigerator without checking out CR? As Fox sees it, business types have pushed aside editorial pros. Here’s part of Fox’s argument: 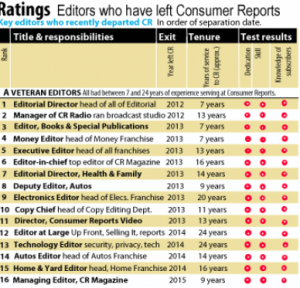 So has the watchdog really lost a lot of its bark—and fangs? This at a time when the ranks of actual journalists keep thinning at daily newspapers all over the country! If anything, we need a stronger CR?

On top of everything else there’s the Amazon factor. Could many people actually trust customer-to-customer reviews more than the work of the pros? I myself think this is one of life’s many, “It depends.” But undoubtedly, with hundreds and perhaps thousands of people reviewing some products sold online, the experts  hold less sway than before. And thus could the bean-counters be saying to writers and researchers, “Ok, we need a lot fewer of you”?

I myself would see such a rationate as a mistake. In this era of so many shoddily made products—no small number of which should be tested over their simulated lifetimes—we still deserve a full-strength CR. 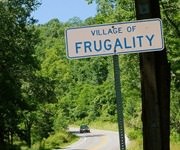