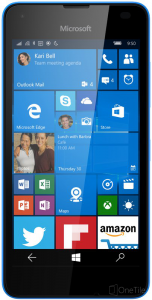 Moves in the Windows Phone ecosystem have been making Windows Phones ever more attractive choices as smartphones and mobile ebook reading platforms for a while now. And now, courtesy of a leak initially aired by Russian site Onetile and later picked up by WMPoweruser, it looks like we have a very persuasive form factor and price point incoming, in the shape of the new Microsoft Lumia 550.

As well as looking good, the Lumia 550 packs some attractive specifications, as confirmed by WMPoweruser. These include a 4.7-inch 720×1280 pixel AMOLED display, 8GB of internal memory plus the usual microSD card slot, and a Qualcomm Snapdragon 210 quad-core CPU running at 1.2 GHz. Naturally it’ll be running the latest version of Windows 10. And the reported cost for all that? About $120.

That screen in particular sounds like a really excellent option for reading ebooks on your mobile device – and hard to beat at that price. As a comparison, Walmart is currently asking $129.00 for the Samsung Galaxy Core Prime, which has only a 480×800 pixel 4.5-inch screen with nary an AMOLED in sight. Reported screen experiences with recent Windows Phone have ranged from excellent (the Lumia 640XL) to serviceable but less than stellar (the Lumia 535), but the Lumia 550 appears to be shooting for the former category.

What’s more, the way that Microsoft’s profit numbers are going suggests that it will be able to bankroll the Windows Phone ecosystem for as long as it cares to. And patent income from Google means that the growth of the Android ecosystem will simply fuel it more.

And options for reading ebooks on Windows Phones are many and various. There’s Kindle for Windows Phone. There’s Freda, much admired by David Rothman. There’s the Windows Phone version of the popular Android app FBReader. There’s eBooks.com’s Ebook Reader. There’s Bookviser Reader, and Legimi. All those are highly rated choices.

What’s more, the choices are likely to get a whole lot wider. For one thing, Microsoft has introduced SDKs to allow Android and iOS apps easily to Windows 10. For another, people are already working out how to use these to run Android apps on Windows 10 phones, unmodified. And finally, Microsoft’s new Continuum vision of a contiguous Windows ecosystem where desktop apps can run on Windows Phones means that all the desktop ebook readers for Windows PCs may become available as fully functional Windows Phone options.

Personally, I’m a diehard Android phanboy. But I’m also a Windows 10 desktop user. And a geek. And a Scot. And all those options, at that price point, with that screen quality, are suddenly starting to sound very attractive. How about you?