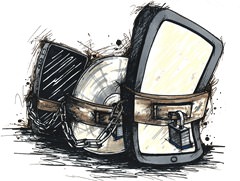 The DMCA exemption rulemaking process proceeds apace. The Register of Copyrights released a set of recommendations (PDF) covering the proposed exemptions it received last year, and then the Librarian of Congress considered those recommendations and released his decision (PDF). The approved exemptions won’t take effect for another year, to allow regulatory agencies time to get ready for the change.

You may recall that just a few days less than a year ago, I submitted a DMCA exemption petition (PDF) requesting the right to unlock the DRM on e-books for purposes of space-shifting and backup. I believed, and still do believe, that it’s important that we receive legal sanction for doing that which many of us do already. Unfortunately, while some of the other petitions were approved, mine was not. Nor was a Public Knowledge request to permit space-shifting DRM-breaking of Blu-rays, DVDs, and downloaded files. It’s all covered on pages 107-114 of the recommendations PDF and 64-66 of the decision PDF, including mentioning yours truly by name.

Effectively, their rationale was that digital-movie bundling services like UltraViolet and Disney Movies Anywhere would be adversely affected by video media space-shifting, and anyway, broad-based space-shifting and format-shifting isn’t sanctioned by the law of fair use as it currently stands.

But the section in the decision document does end with this tantalizing paragraph:

At the same time, the Register recognized the consumer appeal of the proposals, and marketplace efforts to meet consumer demand for accessing movies and books in a wide variety of formats. According to the Register, the policy judgments surrounding the creation of a novel exception for space- or format-shifting of copyrighted works are complex and thus best left to Congress or the courts.

So, the idea goes, Congress could declare e-book space-shifting to be fair use, and that would improve the likelihood of DMCA exemptions being granted for it. Not that it’s likely to happen without an active lobby, but they have legislated fair use before, in other media. For example, a DVD player called ClearPlay that edits movies on the fly to bleep out obscene language was explicitly declared legal by an act of Congress. So it’s within the realm of possibility that someone could get a similar law passed for e-books, if there was enough interest.

At any rate, I’m gratified they took my proposal seriously enough to consider it, but it wasn’t ever really in any doubt that it would get rejected. Proposals such as mine, or Public Knowledge’s, would effectively gut a major provision of the DMCA—which intentionally outlaws bypassing DRM even to make uses that might otherwise be considered fair—and the Librarian of Congress isn’t going to take that kind of action unilaterally. Effectively, with the DMCA the way it is, you have to get your use explicitly declared fair before you can get an exemption even considered.

That being said, it’s not as though the general e-book-using public has really lost anything except the possibility of legitimate recognition for something many of them already do anyway. After all, the means to crack DRM are out there on the Internet, and anyone can download and use them, and nobody’s ever going to know you’re breaking the law unless you do something dumb like upload watermarked e-books to peer-to-peer.

Meanwhile, some exemptions that could be important to e-book and mobile device users were granted—mobile phone unlocking and jailbreaking is still legal, and once the exemptions take effect the permission will be expanded to other multi-purpose devices, like tablets, wearables, and smart TVs (as long as it’s for the purpose of installing new software). So, once the exemptions take effect in a year, doing something like installing CyanogenMod on a Nook HD or putting Google Play onto a Fire tablet should (at least theoretically, me not being a lawyer) be considered explicitly legal.

However, jailbreaking single-purpose devices like e-book readers is not, as nobody who asked for it bothered to offer much in the way of supporting evidence for it. Jailbreaking video game consoles and abandoned software like the PARIS music recording software was rejected, too.

Other approved exemptions included allowing educators and students, libraries, and museums to circumvent motion picture DRM for criticism, comment, and education; allowing bypassing DRM on automobile computers for “diagnosis, repair, or lawful modification of a vehicle function”; security research on cars, voting machines, and medical devices; jailbreaking abandonware video games for personal use, educational, or archival purposes; and bypassing DRM on 3D printers in order to use non-manufacturer-approved feedstock. The Consumerist covers the matter in more detail. (Found via The Digital Reader.)