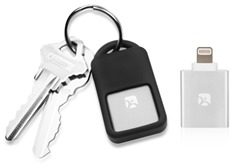 Are you a Lightning-connection-equipped iPhone or iPad user who wishes you had access to removable file storage? Perhaps you’re jealous of the USB-OTG devices that Android users can plug in? Help is on the way.

The team behind the Meenova Dash line of USB-OTG MicroSD readers and other accessories for Android devices has a new Kickstarter out for its latest device, the Dash-i Lightning MicroSD reader. As far as I’ve been able to tell, the Dash was the first USB-OTG card reader, and is still one of the smallest—and now Meenova is following up with a similar version for the Apple side. There’s also a “Dash-i Plus” model that incorporates a microUSB charging port into the block so you can charge your iPhone or iPad at the same time.

The Dash-i will run $25 for the base version, or $18 if you’re quick enough to get in on the early-bird special. All early birds and the first 1,000 regular price supporters can get a free upgrade to the Dash-i Plus for sharing to social media. The Dash-i Plus is $30.

Of course, you can already get an official Apple Lightning to SD card reader for $29 from the Apple store. However, the Dash-i is a compact little brushed-aluminum block that slots right into your phone for easy use on the go, not a dangly bit on the end of a cable that will flop around. It will also include a companion app that will launch automatically when you insert the reader. The app will let you move files back and forth—unlike Apple’s reader, which is just meant for reading photos and videos taken on stand-alone cameras.

As far as I’ve been able to make out, the original Dash Mini MicroSD reader for Android devices, Kickstarted in 2013, was the very first such reader for USB-OTG. Now Meenova has an updated microUSB model, a full-sized SD card reader, and a USB Type-C version, too. The Meenova team has run successful Kickstarters for all of these, so it’s got a good track record of coming through with its crowdfunding projects.

Most e-books are small enough that you probably don’t need to worry about how much space they would take up on your iPhone, but this would make a great solution for storing and viewing other media. The Kickstarter has 34 days left to run, and the estimated delivery date is June, 2016.