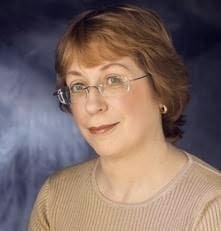 On the TeleRead podcast today, I had an excellent interview with Diane Duane. We also had good questions from a number of chat participants, one of whom walked away with the 9-book Young Wizards New Millennium Edition collection. (He or she had to leave shortly before the drawing; hopefully they will get in touch with us once they hear that they are the winner.)

For the full experience, you should listen to the podcast; it can be streamed or downloaded from the TalkShoe page, or using the badge at right. It was supposed to be in iTunes, but it seems to have vanished from there; I’ve resubmitted it. But here are some of the high points.

The first half of the podcast was spent discussing Diane Duane’s e-book store (which is currently running a sale preparatory to the launch of her new Young Wizards novella “Lifeboat” on Tuesday). She set up this e-book store in order to sell her Young Wizards novels to territories where Harcourt’s e-book version was unavailable. After trying other options, she settled on Shopify’s shopping cart system, which she has used for the last five years.

One interesting aspect of the store is that, thanks to her trusty iPad, she can administer the store from anyplace that has mobile broadband. That has proven handy when she has been traveling. While she has had a few troubles with the store, by and large it has proven easy to run.

Diane Duane also doesn’t recall having any trouble with people upset that her works weren’t available directly through Amazon, though the issue of how to sideload them to people’s readers has come up a time or two. She generates different EPUBs optimized for each reader, and is looking into ways of including explanatory notes with the e-book files.

By and large, Duane finds the issue of whether to self-publish a work has boiled down to the work’s length. Traditional publishers haven’t been interested in her recent Young Wizards novellas, so she is publishing them herself, and will be offering them in print via Amazon as a collected volume after the third one, “Lifeboat,” is published (which she expects to take place on Tuesday).

Another work that will likely end up self-published is The Door into Starlight, the final volume in the Middle Kingdoms series. This is the book Duane promised to write if enough people shared her post about it on social media. Duane says that the number of shares she got suggested she would get a number of sales equivalent to a 4- to 5-figure advance, so she just has to find the time to sit down and write it. She hopes to have it ready by sometime late next year.

In most other cases, Duane tends to prefer to place projects with traditional publishers when she can. She’s built up enough of a reputation over the years that she usually can place most of her books there without needing to self-publish them—with the occasional odd exception, such as a historical novel she wants to do but has been as yet unable to place with any publisher. That may end up being another work she has to self-publish instead.

We had a brief discussion of the VAT MOSS issue that she had thought might lead to having to close down her e-book store at the end of last year. She said that she and Peter basically researched the matter for the whole month of December and eventually found they could get by within the new regulations by having their accountant VAT-register them. They were lucky enough to be in a position where they could do that, but smaller businesses weren’t going to be able to afford spending that kind of time and money on it. It is such a complex and involved issue that trying to talk to EU politicians about it often isn’t useful—she used the example of some officials thinking that “IP addresses” referred to intellectual property.

Duane noted that the changes came about in order to patch the big loophole that certain major corporations were using, but it had led to unintended consequences. She was optimistic the matter would get sorted out, but it would take time.

David Rothman proposed a question about national digital libraries with fair royalties to authors. Duane said that she was all for that; it was similar to the fair lending system the UK already has for library lending. She is also willing to work with libraries that request copies of her e-books for checkout. I compared it to Kindle Unlimited, and she noted that paid-subscription libraries was how regular libraries worked in Benjamin Franklin’s era.

In the later part of the podcast, we discussed Duane’s backlist titles, including the Young Wizards series. We discussed what prompted her decision to rewrite the first version of the series into New Millennium Editions—the complaints she got from millennial readers that the absence of modern technology in the oldest books didn’t make sense to them, as well as the large royalty drop-offs after the first book that showed that potential readers were being turned off by the books’ old-fashioned nature.

She didn’t have a huge amount of difficulty with the rewrites—and since the stories were her universe, so she could simply remove scenes and insert new ones if necessary. She didn’t particularly remember whether there were any changes she was especially proud of or especially distressed by.

The New Millennium Editions are currently available only electronically from Duane herself, because the original editions simply weren’t selling well enough for Houghton Mifflin Harcourt to feel it would be worth the effort to republish new versions—but when and if she was able to line up Young Wizards film adaptations, that would probably change.

Duane noted that she’s keeping a file of other changes that might need to be made as she comes across them, and that there will eventually be another revised edition of these works (that anyone who had previously bought the NMEs would get for free). There are no plans to move them forward another few years, however. At present, she simply plans to be more careful about how she refers to chronology within the current batch of works.

The tenth Young Wizards novel, Games Wizards Play, will be published early next year. Duane already has plans for the eleventh book, which will be more serious and resolve a story thread actually originally planted in the very first Young Wizards novel, hopefully to come out about a year later. As for other works, Duane hopes to write one more Star Trek tie-in novel—her last—that would be a heist novel chronicling Kirk needing to steal a starship.

Diane Duane noted that she was looking into the possibility of licensing Young Wizards for movie adaptations, provided that she would be the scriptwriter and have creative control. She has been collecting enough screen writing credits lately that it was beginning to look like a possibility. She didn’t have anything concrete to report yet, but undoubtedly lots of her readers will have crossed fingers. She also has more script work coming up, including for some things that will be seen in the US. Beyond that, she couldn’t really talk about any of the other projects she had on the burners.

All in all, it was a highly enjoyable podcast, and I learned a lot. This summary just hits the major high points, but we covered a lot of other interesting ground and I would strongly encourage anyone interested in e-books, SF, fantasy, or Diane Duane’s work to take a listen.